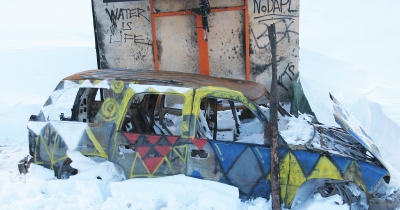 Putting their own twist on native traditions and techniques, contemporary Native American artists celebrate their culture and craft while exploring modern-day themes, imagery and artistry.

The Art of the People: Contemporary Anishinaabe Artists shines a light on contemporary work being made today and showcases nationally recognized and early career Native American artists at two venues in West Michigan.

The Art of the People features sculpture, painting, ceramics, beadwork, jewelry, basket weaving, mixed media and photography. The Anishinaabe artists use traditional techniques and materials to help carry on their culture, melding symbols and traditions of Native American identity with contemporary sensibilities to create new stories and speak to current issues.

“First and foremost, it’s about artists making intriguing art,” said Art Martin, MMA’s director of collections and exhibitions and senior curator. “It’s a pretty diverse mix of what the artists are making, with that overall unifying theme of cultural expression, tradition and continuity.”

The winter exhibitions were a direct response to hosting Edward Curtis: The North American Indian exhibition a few years ago. The Curtis show was very popular, but his work is not without controversary, Martin said.

“It helped preserve a lot of cultural heritage, but at the same time it helped perpetuate a lot of stereotypes,” he said. “One of the high points, the exhibition very deliberately gave the other side of the story and that Native Americans had not vanished and still have a very vibrant arts culture and religious culture.”

The MMA hosted an exhibition of Quigno’s work before and got to know artist Jim Denomie after he was a featured panelist for Curtis-related programming. The related exhibits, Jim Denomie: Challenging the Narrative, and Levi Rickert: Standing Rock, Photographs of an Indigenous Movement, round out a showcase of Native American tradition, artistry and advocacy by living artists.

Artists selected for The Art of the People address issues of craft, culture, identity, social and political justice, and popular culture in a myriad of ways, working in traditional and nontraditional media and experimenting with techniques, materials and subject matter. Some works are very representational, while others are abstract and cartoonish.

“Some of the artists are doing things that are completely modern, but doing it as a way of exploring identity and reframing identity,” Martin said. “They are moving that continuity of storytelling and cultural identity forward.”

The Anishinaabe Peoples encompass a number of tribes — including the Ojibwe, Bodawatami, Odawa, Salteux, and Chippewa — that share similar languages and customs. Early inhabitants of the Great Lakes area of Michigan, Wisconsin, Minnesota, and sections of Canada, the Anishinaabe were a woodland people who lived off the land and the region’s natural resources. Modern Anishinaabe remain a spiritual people connected to nature and determined to revive and preserve cultural beliefs and traditions. These contemporary artists are helping to define their culture for the mainstream, elevating their identity and the issues that are important to them, and passing that knowledge to future generations.

“The religious teachings, the clothing, the belief systems, the language, the music — really everything was banned,” Martin said. “There was a hard push for them to assimilate into mainstream pseudo-European culture. This is about reclaiming all of that and defining themselves in the national consciousness.”

The work of Le’Ana Asher brings to life traditional Anishinaabe regalia through colorful and detailed brush strokes. She paints Natives in dance and ceremonial costumes, reminding viewers of this enduring cultural practice — now thriving once again — despite the U.S. government’s century-long ban on such ceremonies.

Quigno is a sculptor and member of the Saginaw Chippewa Tribe. He works with a variety of stone, carving raw blocks into flowing forms. Quigno has completed numerous public commissions around Michigan, including “Niikonii Kiinaa” in downtown Muskegon.

While The Art of the People is running concurrently at MMA and GVSU, each venue features different work by the artists and opens the door for cross-programming.

“It became this great opportunity for us to partner, adding more work from the same group of artists,” Martin said. “We have a good history of working with Grand Valley. It gets us on campus and it gets the campus off of campus. It’s a good outreach for both of us.”

“Jim’s work is about telling stories about the history of his people, the culture of his people, and that intersection of Native culture and mainstream European-American culture and all the results of that collision,” Martin said. “His work looks at past and current injustices. It looks at an outsider’s perspective on our mainstream culture. It tells stories about Anishinaabe beliefs that we may not hear.”

In the Tuttle Gallery near the gift shop, Levi Rickert: Standing Rock, Photographs of an Indigenous Movement captures one of the most recent clashes involving Native Americans trying to protect land and water. Rickert, of Prairie Band Potawatomi Nation, is the founder, publisher and editor of Native News Online and documented his journey to Standing Rock in 2016 as part of the Dakota Access Pipeline protests.

His photographs offer insight on the on-the-ground conflicts and clashes between protestors and private security firms at the site, along with the day-to-day experiences of Native people, their way of life, and their shared fight for justice.

The Art of the People: Contemporary Anishinaabe Artists, Dec. 10-Feb. 28

Tweet
Published in Visual Arts
More in this category: « Mural, Mural, On the Wall Lathes and Legacies »
Login to post comments
back to top