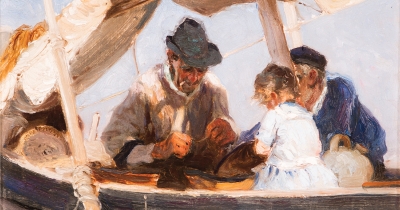 "Whatever art offered the men and women of previous eras, what it offers our own, it seems to me, is space - a certain breathing room for the spirit.” — John Updike

True when Updike wrote it, these words have become, if anything, more true. 2020 has offered endless ways to stifle our spirits, and fewer ways than before of finding fresh air.

However, there are three exhibitions at The Grand Rapids Art Museum, each providing space enough to breathe, and beautiful things to look at while you do.

Alten, who immigrated to Grand Rapids from Germany in his teens, seems to have always been in motion.

“They probably didn’t use this word at the time,” said assistant curator Jennifer Wcisel, “but he hustled.” The young man took every opportunity he could to paint, decorating public buildings and talking people into commissions. Supplies in hand, he would hop onto a Grand Rapids streetcar and sketch buildings or nature

In later years, he traveled extensively, both through the United States and Europe, seeing new things, honing his craft. The work paid off — he became famous nationally. Galleries in New York City, Chicago, and Detroit, among others, displayed his pieces. Along with another local artist, he opened a school, cementing his legacy.

Next year marks the 150th anniversary of Alten’s birth. The exhibition celebrates his accomplishments by displaying not only several paintings from the museum’s own collection, but works held by Grand Valley State University, Grand Rapids Public Library, and others, including some from private collections.

One such work is Self-Portrait, 1913. In it, the man looks lean and serious, his eyes clear-seeing. The windows of the soul, they say, but his hair might reveal just as much: a bit of floppiness suggests momentarily halted action, as if he were about to turn back toward the canvas.

Hand and Machine in Harmony: Regional Arts and Craft

By the late 19th century, the machines had taken over, more or less. Factory production had begun to edge out traditional, artisanal work. Gains in efficiency and affordability had come at many costs, not least an aesthetic one: design had become an afterthought, allowing soullessness to creep in.

In Grand Rapids, two manufacturers working in the booming furniture aimed to change that. Charles Limbert and Albert Stickley appreciated that factory production could make products affordable for more people than ever before. They just saw no reason those products couldn’t also be long-lasting and beautiful

To do so, they knew they couldn’t solely rely on machines. Pieces to their chairs were produced by machines, but later joined by hand. They recognized that hand joinery would result in a sturdier, better product

The exhibition also features the work of Forrest Mann, a Grand Rapids artist who founded the Grand Rapids Arts and Craft Society in 1902. Like Limbert and Stickley, he had a passion for beautiful, well-made objects. Working with the Society, he passed on traditional techniques of woodcarving, jewelry-making and ceramics, preserving tradition in an age of innovation

“I hope (the exhibition) will show people that Grand Rapids has always been a center for creativity and design,” Wcisel said. “It’s a continuum. Factories began to care more about design, hiring designers, creating beautiful things for average consumers. And that directly affected the mid-century modernists. There’s a legacy of Grand Rapids being a creative center, and the exhibition celebrates that.”

An Interwoven Legacy: The Black Ash Basketry of Kelly Church and Cherish Parrish

This exhibition features the work of Kelly Church and Cherish Parrish, a mother-daughter pair. For generations, their family has practiced the ancient art of basketry, harvesting black ash trees from swampy areas, processing them, and converting the raw materials into beautiful, meaningful objects

Like too much of Native American history and practice, the black ash tree itself is in danger of disappearing. The emerald ash borer, an invasive insect, has steadily killed vast swaths of trees. In 2014, a U.S. Forest Service Agent said, “99% of the ashes in North America are probably going to die."

For now, we still have them, and we still have the work of Church and Parrish. The work displays a high level of craftsmanship — and while it’s faithful to tradition, it also employs that tradition in new ways, commenting on life and society. Six generations ago, a basket in the shape of a pregnant woman was unlikely to emerge. But more traditional objects, like bassinets, will be on display, too

Like Alten, too restless to fit comfortably within any artistic school, and like Limbert and Stickley, who looked to the past while building the future, Church and Parrish are engaged in both craftsmanship and artistry, both preservation and innovation, something both nourishing and energizing. Like fresh air.

Come to the GRAM and breathe it in.

An Interwoven Legacy, Postponed to 2021

Tweet
Published in Visual Arts
More in this category: « Reclaiming the Narrative Backstage Bio: Ushered In »
Login to post comments
back to top