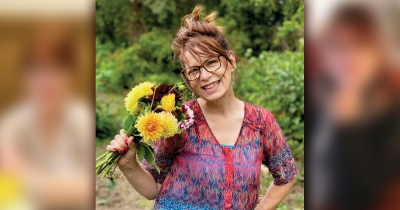 Fifteen years or so ago, Cynthia Vincent attended a concert at St. Cecilia Music Center. Like many people, she was enchanted not only with the music but with the building itself. St Cecilia is a nearly ideal venue for live music: intimate and beautiful, with excellent acoustics and no bad seats.

She appreciated the history. St. Cecilia was started by women in 1883. “Those women got the job done,” she said. “They had connections. They understood the community.” Unlike other local organizations, St. Cecilia has stayed in its original building. “I just think that history spoke to me.”

Inspired, Vincent went to the front desk after the concert and asked how she could help. An administrative assistant at MSU, she thought those skills may come in handy. What St. Cecilia really needed, she was told, were ushers.

The role turned out to be more than simply leading someone to their seat. Ushers serve as hosts, welcoming guests, doing their best to ease them into what should be a meaningful, memorable evening. At times, that might involve finding a replacement seat for someone with a broken leg, or gracefully halting a latecomer before he walks in halfway through the first number, so as not to disturb the magic.

St. Cecilia, like many venues, is not exactly overstaffed; its employees wear many hats, sometimes completing one task only to rush to another. Vincent found herself helping by corralling the other volunteers — one thing she could take off the employees’ plates.

In time, management approached and asked if she would like a formal role as volunteer coordinator. She accepted, and over time helped formalize the program. A handbook was created, documenting expectations. Today, volunteers receive an orientation, including a tour of the building and facts about its history. It’s important they get comfortable with the information; guests will have questions, after all.

On the day of a show, volunteers arrive half an hour or 45 minutes prior to start time. Wearing their uniform of black and white, they go over the rules, don their name tags, and take their positions. In the event of an absence, Vincent reassigns duties as needed. Booklets in hand, they prepare to greet the guests.

She’s proud of the lack of turnover. People who volunteer at St. Cecilia tend to keep doing so; some volunteers have been there longer than she has. “They’re just a joy to work with. They get excited for their shows, and they end up recruiting others, too. All of us working on the same goal: pampering our patrons.”

She misses it. While most people can stream music (“Thank God for Spotify”), some don’t have access to technology, or a comfort with it. Besides, technology can get in the way. “Being there in person is richer and more engaging,” she said. “That connection is deeper. More immediate. All your senses are engaged. Anything can happen at a live show.”

Asked whether the community recognizes what a jewel it has in St. Cecilia, she says it depends. “The folk shows sell out.” Folk and jazz fans from Toronto, Wisconsin, and other areas make the trek to hear their favorite artists. “It’s great. We get to be these mini ambassadors to the city of Grand Rapids, showing off the building, recommending restaurants. It’s really exciting.”

“I wish more patrons would be there for the classical sessions, though.” The soloists who play the venue are as talented and important as anyone who comes to DeVos Place.

Closure due to COVID-19 has hit hard. “I can’t believe the void it’s created. I miss the volunteers. They’re so passionate, so giving with their time and their talent. And I miss live music. If I heard it, I’d burst into tears. It’s just so profound.”

For now, there’s recorded music. She mentioned a New York Times article that she’d read the day we spoke (“5 Minutes That Will Make You Love Sopranos”). After we hung up, I Googled it, and soon found myself lost in Renée Fleming’s recording of Rachmaninoff’s “Vocalise.” My den is no St. Cecilia, but it’ll do for now.

Tweet
Published in Visual Arts
More in this category: « Lathes and Legacies
Login to post comments
back to top