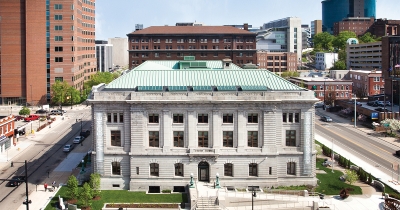 The Urban Institute of Contemporary Art has found a new home downtown Grand Rapids, leaving behind its spacious 2 Fulton location for a charming and historic change. Though only a few blocks away on 17 Pearl Street, the new building will bring about massive shifts for the UICA.

“I knew that for the future of UICA, we had to strategically downsize and rethink our programming in order to make it through the pandemic,” said Miranda Krajniak, executive director of the UICA.

“We’re already a rare bird. To have a contemporary art institution of our age in a city of this size is rather amazing, something Grand Rapids should actually be very proud of. But survival and maintaining mission is more important than anything.”

For Krajniak, packing up 2 Fulton exposed emotions of grief and sadness — not just for her, but for those who walked the halls of UICA before Krajniak. “I spent a good amount of time considering all the hard work everybody else had put into this (space) and appreciating the time I got to spend there. And then I moved on, because I had to. As much as you’re not supposed to be attached to buildings, everybody is.”

Change brings challenges, but the UICA as an institution is no stranger to this. After all, change is basically the UICA’s middle name.

“We’re ‘contemporary,’ so change is a built-in function of how we do our mission. We change and we adapt,” Krasniak said. “This is our 6th building, so the UICA has never been a building; it’s an idea.”

The idea of what UICA is and could become is expanding, even as the museum physically downsizes.

Krajniak isn’t letting the new building’s size define her ambitions, however. Her motives for the new space will bring greater financial and physical accessibility for Grand Rapids residents.

“Though 2 Fulton was a wonderful and majestic building, the overhead costs of it were so pressing that we had to charge a fee for entry, and that was a major shift. The first 36 years of UICA’s existence were free admission to the public. I’m really looking forward to going back to having free admission, so UICA can be a place where your book club can meet. It can be a place where you gather and meet up with people before you go out to dinner.”

The UICA’s new space is only one floor, which Krajniak describes as a “huge opportunity” when it comes to making the museum easier for people of all abilities to enjoy. It will also feature an outdoor garden with contemporary sculptures, so people can engage without entering the gallery.

“Everything will be basically on the same level. There will be fewer elevator rides, less confusion about where you are, and it will be a little more human-sized, although still grand and absolutely gorgeous.”

Krajniak is also focused on increasing cultural inclusivity at the UICA. “I think accessibility is the future of museums. So how do we look at what barriers we have present and actively smooth them out so more and more people see art as for them?”

The UICA will be ambitiously revamping its membership program to further reflect these changes.

“We’re going to spend weeks one-on-one with our members before we announce things publicly,” Krajniak said. “We are going to try and be at the forefront of what museums are going to be in the future.

“An institution that no one cares about doesn’t get feedback. UICA gets a lot of feedback.

We’re always seeking feedback, because we have to do better.”

Though focused on what the UICA’s move can do for the Grand Rapids community, the change from 2 Fulton to 17 Pearl brought about a full-circle moment in Krajniak’s personal life.

“I started as an intern in this building at the Grand Rapids Art Museum,” she said. “I was in the basement. I’ve now made it to the first floor, and I have a window.”

Her experience working at 17 Pearl Street as a student at Kendall College of Art and Design led her to change her academic major — and her future.

“Experiences with contemporary art and art museums were very minimal in my early years. When I had an internship here at the GRAM, that was the first time I knew about museums, really, and that I could work at one.

It was a major moment in my life that actually moved me from visual art into museums.”

The UICA will host a soft opening for the museum’s new space on July 15. A party will be planned for a later date, once vaccines become fully available.

“When we finally decide to have the big party to open, I want everyone to be able to be there, including children and families,” Krajniak said. “We’re going to treat it truly as a soft opening until everyone feels comfortable having a glass of champagne.”

COVID-19 threatened the UICA’s future and submerged the institution into a grieving chatter of what-if’s and what-now’s. But with a cozier, smaller space to explore, Krajniak is now able to rethink how she sees the UICA fitting into the lives of Rapidians post-pandemic.

“When our final product is open July 15, it will be the version of UICA that Grand Rapids needs now. I want Grand Rapids to use UICA as a living room.”

Tweet
Published in Visual Arts
More in this category: « Art on the Farm Taking Initiative »
Login to post comments
back to top