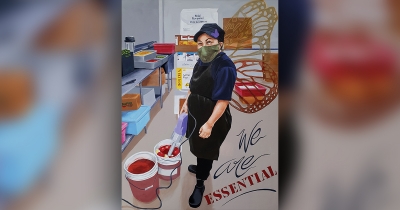 Maryjo Lemanski, visual artist, had been thinking about what to do after the world opened up again; not only what she would do, but what the community would do. “This was a time in people’s lives that we pushed the pause button,” she said. “We had this time to sit back and decide how to reemerge.”

To help inform that decision, she and others surveyed random strangers. They went to post offices and grocery stores, deliberately avoiding standard art venues, and asked the people they stopped what they thought about the world of the arts.

The picture presented was not a rosy one. Art organizations were elitist, they said, and the events they put on were expensive and out-of-touch. People surveyed wouldn’t feel comfortable going into a gallery or a music hall, for the most part. They wouldn’t feel welcome.

The takeaway seemed clear: There was a need to go to where people were, and to do so with free events.

A seven-person steering committee, called “Creative Minds” and representing each of the three communities, began to discuss how to highlight the various arts with free, high-quality, accessible events. They made the decision to focus on one art form a year. 2021’s is the visual arts.

The first event to be staged is Unmasked: Photographic Portraits After 2020. The SDFAI asked members of the community to submit not professional photographs, but portraits taken by cell phone. The SDFAI put on a workshop to teach the basics of cell phone photography. Ultimately, the organization received 100 entries, some of them remarkably potent, and culled that list to the best 50.

The portraits were displayed in the newly opened Saugatuck-Douglas District Library building, a large, open space that allows viewers to spread out and take their time. Library Director Ingrid Steen Boyer has been glad to see library patrons, visiting for other reasons, come across the photographs. The exhibit runs through September 7.

Several events will debut in July. Beginning July 1, the history center will host Art of the People: Contemporary Ashinaabe Artists. The exhibit will include works by seven artists, and draws from a larger Muskegon Museum of Art exhibit. It will run through October 10th.

If approval is granted by Douglas, Grand Rapids’ SITE:LAB will stage a musical event at Wade’s Bayou. The event is to feature poetry, jazz, hip-hop, and cello music and is to occur 7-10 p.m. on July 17.

By staging these events, Lemanski hopes not only to attract those who hadn’t traditionally attended art and cultural events, but also people from outside the three communities, resulting in increased pride in the communities, as well as the business those visitors would bring to bed and breakfasts, restaurants, and more.

Monetary concerns aside, the organization was and remains a labor of love. It’s running on a lean budget, and none of its members are paid. 501c3 status has not been pursued. Any money generated by the art will go to the artists themselves; and next year, when the focus turns to music, the musicians will be paid.

Calls and e-mails have begun to come in, Lemanski said. Community members have reached out to say how great it all is. It’s possible – in fact, it’s likely – that some people, surveyed at a post office or grocery store, have stopped by the library only to discover beautifully composed photographs of members of their own community, taken by people they know, captured on the same kind of device that they have in their own pocket or purse: art close enough to touch.

Tweet
Published in Visual Arts
More in this category: « The UICA Returns
Login to post comments
back to top