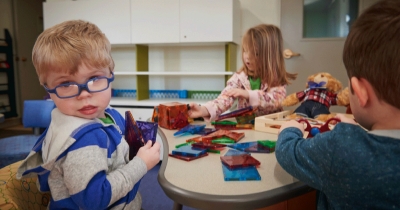 When Amanda Barbour was looking for a table, she wanted it to come from someone local. She wasn’t buying it for herself; Barbour, the founder and executive director of Children’s Healing Center, was buying it for the center. It would sit outside, to be used by children with weakened immune systems, their family members, and the staff and volunteers whose mission it is to help them.

Barbour found a local man who did good work. At the time of the commission, that man, a father, did not know that his own child would grow ill enough to use the center.

Twelve years earlier, Barbour, a 21-year-old who had recently secured a job in architecture, was diagnosed with stage four Hodgkin’s Lymphoma. Her life became a series of medical appointments and procedures; with her immune system compromised, she became isolated, then lonely.

She emerged on the other side of the disease determined to make a difference for others suffering from sickness and isolation. After five years of fundraising, hard work, and community outreach, Children’s Healing Center opened. Its mission is to provide a place for children with weakened immune systems to socialize, play, stay active, and express themselves through art, music, and other activities.

Situated on Fulton Street, the center is housed in an inviting, red-brick building. On the sign, three bright figures represent children in motion; arms are raised, in play or out of joy. Visitors step into a sealed entryway, where their temperatures are taken. A sophisticated air filtration ensures that the building stays safe for those with weakened immune systems. Staff members and volunteers trade out their regular shoes for sterilized pairs, and each night, the building is cleaned.

A whiteboard hanging in the lobby lists the date and times of upcoming activities. Deb Winn, the center’s program director, sees those activities as vital to maintaining the emotional, physical, academic, and social lives of the children the center serves.

“The children that come here aren’t able to leave the house very often. They’re immune-compromised, whether due to the illness itself or the medicine used to treat their illness. Sometimes these are temporary illnesses, but sometimes they’re lifelong. Here, they can interact with other people.”

Beyond the reception area, a large area allows for fitness programs (martial arts, yoga, dance, more). Throughout, space has been considered: there is room for wheelchairs, as well as room for those who don’t want to participate in a group activity but who might want space to play on their own. Parents have not been forgotten either; one room contains massage chairs, which provide some relief for the anxieties and concerns those parents live with every day.

Color is a constant. The furniture is designed both for function and style. It’s designed to be inviting, reassuring; it’s enough to break your heart. Several tiles hang on what Winn calls a memory wall, each decorated in its own way, and each bearing the name of a child who has died while in the program.

Asked whether she finds the work difficult, she said that it can be, but that her daughter’s illness prepared her for it. “And it’s important work,” she said. At any given time, there are 175 or so members in the program; between 400 and 500 visits to the center take place each month.

Winn led me to the art center, which recently held a tie-dye event (wisely, this took place outdoors). Winn finds that, while physical activity is important, it can seem competitive or comparative in ways that some children resist, whereas art is more about expressing yourself as an individual. It’s important to her that the center offers both.

One of the most important aspects of the center is the social time it provides. While strides have been made in reducing bullying, kids are still kids; and even the best-intentioned healthy child does not truly understand what severe illness is like. Talking with others in similar situations helps.

In the board room, we sat and discussed the practicalities of the center. As with most nonprofits, the center’s greatest needs are for money and volunteers. The former matters – the center isn’t turning away checks – but the latter is in some ways even more important, and more difficult to find. Unlike a soup kitchen, the center doesn’t easily allow for one-off group events; instead, volunteers need to commit to coming weekly, and, ideally, for at least a year.

Outside, we walked past a small, pretty garden to the play area. Big, colorful instruments — recently installed, and donated by Percussion Play — stood in a loose semi-circle. Small animal statues practically begged for young kids to hug or climb onto them.

Nearby, a table sat, made for the center by a man who didn’t know his daughter would sit at it.

The center’s work continues, and will likely expand. There is no lack of sick children in this world. But (although it might seem otherwise), there is no lack of compassion, either. Just take a look at the Children’s Healing Center. It’s in every brick.

Tweet
Published in Visual Arts
More in this category: « Artist Profile: Maddison Chaffer
Login to post comments
back to top