The 49507 Project: 'Reclamation and Liberation' 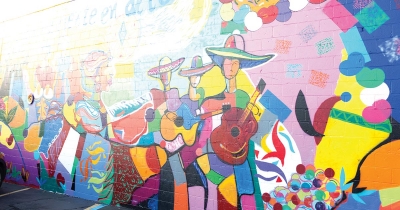 Art for the people, by the people – that’s what The 49507 Project is all about. Lead by Black, Brown and queer artists and youth, this public art initiative seeks to shift power dynamics in under-resourced areas, specifically in Southeast Grand Rapid’s 49507 zip code.

“This art isn’t only a beautification initiative but an opportunity to reclaim space,” said Marcel Price, the executive director of The Diatribe, the organization in charge of The 49507 Project.

For artist Esan Sommersell, The 49507 Project is an opportunity to redefine the neighborhood he was born and raised in.

“For me, it is a chance to put something in my neighborhood that represents me, and something that I can give back to my neighborhood and the people of the neighborhood,” Sommersell said. “Reclamation and liberation are the words that define the project, in its entirety.”

There are currently seven murals created under the 49507 Project. In 2022, that number will jump to 15. Each mural will be designed by a collaboration between artists and youth to represent the area it lives in, which often differs from the typical image of West Michigan.

“When you think of Grand Rapids, a lot of times you think enterprise, business and philanthropy. You don’t think a lot of the things that really make our people in our neighborhoods what they are,” Price said.

The 49507 Project creates art that isn’t designed to fit into the typical narrative of Grand Rapids. In other words, the art being made isn’t supposed to be “West Michigan nice.”

“This is an opportunity for us to center artists as being whole artists, and to center artists that you don’t normally see on the front and center of our city. Artists not doing work in conjunction with these huge entities to benefit corporations, but to really pour into the neighborhood,” Price said.

The overall initiative is designed to take up space–to cover buildings in the voices of the people who live beside them.

The 49507 Project also leads listening sessions for the neighborhood’s youth to foster conversations about art and activism.

“For me, sitting in on the listening sessions last year when I was one of the artists involved, I always left thinking our future’s in good hands,” Sommersell said. “I want to inspire these kids to keep nurturing these thoughts that they have.”

These listening sessions became the foundation and inspiration for artists when designing The 49507 Project’s murals. The students participate in every step, from brainstorming, to painting, to unveiling.

“Young people unveil these murals, perform poems, and talk about their identity, their heritage, their neighborhood, and about what they’ve learned,” Price said.

“Us artists have the opportunity to translate all of that,” Sommersell said.

“Seeing as how art throughout history has always been tasked with the job and purpose to push the narrative, I think this is a major opportunity for us to take what this community is crying out for and to give them something that can stand the test of time.”

The 49507 Project is not exclusive to its zip code, however. The artists and leaders of the project want people from all over West Michigan to come enjoy the murals, take pictures with the art, and stop by local businesses.

“Come from Holland, from the West Side, from East Grand Rapids and see the art. Get something to eat in our neighborhood. Support our businesses, soak in the culture. It’s beautiful, and you’ll enjoy it,” Price said.

“Get into, accept, and understand the heart of this project,” Sommersell said.

“Redlining is still a factor in today’s society everywhere. It’s important that we accept things so we can change the narrative for the future, so definitely come out here, take part, and take pictures.”

The Diatribe and The 49507 Project are repainting the narrative of Southern Grand Rapids through art–not just any art, but art designed for and by the people living there.

“It gives the community a chance to create something in the neighborhood that represents them,” Sommersell said.

“There’s a significant amount of movement behind it,” Price said.

“And liberation is contagious.”

Tweet
Published in Visual Arts
More in this category: « In Dialogue at the GRAM
Login to post comments
back to top