Coming Home: The Return of Filmmaking in West Michigan 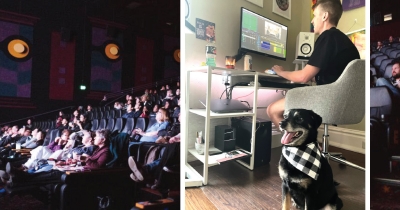 The Grand Rapids Film Festival is back. After a short hiatus due to the COVID-19 Pandemic and a scaled-down appearance at last year’s ArtPrize, the folks at GRFF are excited to continue providing a necessary launchpad for artists and filmmakers in West Michigan, and one that they’ve been hosting now for over a decade.

“The goal moving forward is to create accessibility to an art that is generally reserved because of the costpoints of entry,” said Amanda Morton, board president of GRFF. “Technology is making that a little bit easier, and now it’s our job to continue opening those doors.”

However, Grand Rapids is no longer the small pond of visionaries it once was, or is sometimes believed so to be. Many local creators are striking out on their own in film festival scenes across the country and the world at large, including local filmmaker Joel Potrykus, whose repertoire is now featured on the highly-acclaimed Criterion Channel streaming service. And yet, they still call this city with a big, blue bridge and a predisposition for craft beer their home.

“There’s this sense of, ‘I make the rules for my art, take it or leave it,” said Matt Everitt, local director and filmmaker. “It does permeate the air around here a little bit.”

Everitt has worked in the midwest film scene for the past seven years. After going to school for pharmacy, then seminary, then joining on with multiple religious organizations as their multimedia designer and producer, Everitt resolved to chase a dream he’s been envisioning since childhood: Becoming a director.

Starting with music video collaborations with popular groups like Mt. Joy, Everitt has since gained recognition at events like the Central Michigan International Film Festival, where his film “Waffle Home” received the Jury Prize in 2021. He is now entering pre-production for a new project, called “You Can Go Home Whenever You Want.”

“You’d be shocked at how many people are willing to get onboard with your stupid idea,” Everitt said. “And then once you get going, you’ll realize that idea isn’t so stupid and that it resonates with people.”

The perfect environment to test out those crazy, off-the-wall ideas arrives at places like the Grand Rapids Film Festival. They help open the door to amateur filmmakers and new artists, providing both a networking space and a chance to see your original work on the big screen. And with the debut of some new categories, like music video and commercial submissions, the festival may have the most diverse selection it’s ever had, enriching the experience for all.

“It can’t be overstated how crucial those scenes are,” Everitt said. “You could be a relatively new filmmaker, and if you get picked you’re playing against some of the best filmmakers in the area.”

But, if submitting early work to nearby film festivals isn’t really your thing, there are plenty of established local production companies in the area, like Detroit and Grand Rapids’ Gorilla, that can provide you with the practical knowledge and experience you need as a new creative. In fact, it was at Gorilla where Everitt once interned and started his journey to becoming the director he is today.

“Grand Rapids has got quite a few big names coming through,” Everitt said. “I got to work with them and listen to them, and be exposed to the level of work that they’re doing there.”

Another West MI production company, NODEHAUS Media, opts for a slightly different style, one more catered to the Gen Z trend of short-form video and looping, vertical formats. Fans of the newly created GRFF 24 Hour Challenge, NODEHAUS and their creative director, Calvin Tran, look forward to participating in the festival through a format they already gravitate toward: Minute-long micro films.

“It inevitably has that diverse quality to it, and that’s something I’m very proud of,” Tran said.

Although Everitt may not be submitting an entry to this year’s Grand Rapids Film Festival, he’s certain he will be there supporting his fellow auteurs. Whether it be short film, feature, commercial or music video, Everitt gets pumped up each year to see what’s coming down the GR pipeline.

Expecting nearly 20 different entries in each category, Morton and the rest of her team at GRFF are eager to get started with the festivities. Spanning an entire day at Studio Park in downtown Grand Rapids, Morton is looking forward to seeing the creative output of some of our city’s up-and-coming artists and filmmakers. And with the newly-added 24 Hour Challenge format, Morton anticipates a wave of filmmaking newcomers, young and old.

“If you’re reading this, and you’re interested in it, then take this as your sign to just do it,” Morton said.

Easier said than done, but that’s how all great artists get started. They consider each opportunity equally, and they never pass up a chance to grow. And if not to win, but to fail and grow.

“You need to understand your artistic voice that you’re bringing to film, and then you just have to do it and realize where you fall short of that,” Everitt said. “And then you do it again.”