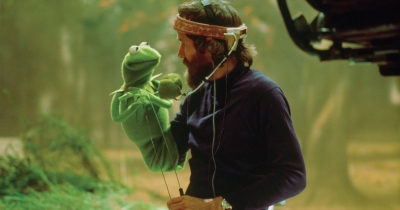 Opening its featured gallery doors to the public in early October, the Grand Rapids Art Museum is proud to display The Jim Henson Exhibition: Imagination Unlimited, as shared by the Museum of the Moving Image (MoMI) in New York City. The collection of more than 170 historical artifacts includes puppets and costumes from all your favorite Jim Henson productions, from The Muppet Show to The Dark Crystal. Even for the Henson newbie, there’s still plenty to love.

“The exhibition is set up for a whole spectrum of interests and engagements,” said Dana Friis-Hansen, director and CEO of the GRAM. “If you didn’t know who Jim Henson was, you’d be able to look.”

Beginning your tour at The Jim Henson Exhibit means first taking a stop in Jim’s early years, when he worked on black-and-white puppet shows like Sam & Friends for WRC-TV in Washington, D.C.. It was on this program where Henson first experimented with those fuzzy, felt puppets we’ve loved for over seventy years, including an early iteration of Kermit the Frog. Even during those first projects, the Muppets became television celebrities themselves, making regular appearances on programs like Today, The Ed Sullivan Show and The Tonight Show.

“We are finding that it’s really inspiring to both kids as well as adults, different generations,” Friis-Hansen said. “Henson’s works influenced kids from the 70s, 80s, 90s and on up, and then parents and grandparents are introducing Henson’s broad range of works to new generations.”

One aspect of Henson’s career that may surprise some museum attendees is the amount of experimental film and documentary projects he had worked on throughout his early life, including an entry in NBC’s Experiment in Television anthology series called Youth 68, which aimed to capture the counterculture and rebellion of the time. Inclusions like these paint the picture of a young creative who was “interested in the visual image for its own sake.”

“He is a great example of how some of the most creative artists can combine disciplines and cut across fields,” Friis-Hansen said. “He’s kind of like a modern-day Leonardo DaVinci.”

Nowhere in the exhibit is Henson’s genius more on-display than in the sections dedicated to Fraggle Rock and The Dark Crystal, where development concept drawings and puppeteering behind-the-scenes photos and blueprints detail the extensive know-how and intention Henson had toward his various mediums. He was a pioneering artist in an already pioneering field.

“Jim Henson epitomizes someone who is an artist, and a creator, and a designer,” Friis-Hansen said. “So, there’s innovation in terms of how he made the puppets, how he developed the puppets.”

Through experiencing Henson’s creativity and art up-close in one singular exhibit, Friis-Hansen and his team hope that visitors take more from their museum experience than they possibly would have before, especially for GRAM newcomers. While the museum’s rotating collection and beautiful facilities are enough for most to enjoy themselves, Friis-Hansen aims to introduce fine art and museum interactivity to as many folks as possible, especially with international events like ArtPrize continuing to introduce art lovers from around the world to Grand Rapids.

“I like to say that we put people first, in front of the art and interacting with the art,” Friis-Hansen said. “And not only art, but design and creativity. We hope to make their lives better.”

Perfect for all ages, The Jim Henson Exhibition: Imagination Unlimited is brimming with magic at each and every turn. Many of the gallery’s best surprises are cleverly hidden around a particularly tight corner or corridor, so as to guarantee that “Whoa!” moment from all. From a certain goblin king’s ballroom tux to an assortment of Muppet Babies, there are plenty of Easter eggs for every longtime fan.

“Museums should be fun,” Friis-Hansen said. “It’s about curiosity, exchange of ideas and openness to different points of view. But also, the fun aspect is a nice draw and should be part of everyone’s museum experience.”

Don’t miss this wonderful exhibition at the GRAM, open until January 14. And if you’re looking to bring the kids along, why not stop by for one of the GRAM’s “PNC Family Days,” where hands-on arts activities and tour guides provide an insight on a particular theme of the exhibit. For example, “Worlds Imagined” will be presented on November 5, 12 and 19.