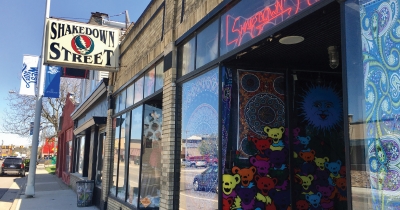 The year was 1990. You and your friends started out the evening flipping through records and CDs at Vinyl Solution, then headed across the street — not just any street, but good ol’ 28th Street — to Electric Avenue to dance the night away. Or maybe you were more of a Reptile A-Go-Go kid and it was a stop at A Scavenger Hunt on Tuesday afternoon, to pick up some new duds to fit the goth-meets-techno vibe.

That was then. This is now.

While the Grand Rapids of today may barely resemble that of yesteryear, many of the city’s fixtures endure. And that takes resilience, and ingenuity, and a steady stream of loyal customers. Over the past months, many of these establishments have had to either temporarily shut down or run in limited capacity, putting in peril their hard-won longevity.

As you prepare to emerge from hibernation, consider a stop at one of these area institutions.

When Shakedown Street opened in 1996, it offered the 420 crowd an alternative to Purple East for paraphernalia — plus apparel, jewelry and décor with a distinctly bohemian feel. It’s known for its locally made pipes and other items and, of course, plenty of incense. Don’t forget to peek in the hippie-themed VW bus, which the owners used on their five-year tour with the Grateful Dead.

Founded in 1979, Tardy’s Collector’s Corner is not your average comic shop: It’s an oasis for gamers, collectors and proud-to-be nerds. The Eastern Avenue shop is host to regular events such as Free Comic Book Day and is filled with new and used comics — including vintage titles — plus artwork, action figures, and memorabilia. The owners regularly attend conventions and are always up on the latest.

With Prohibition newly lifted and Grand Rapidians thirsty for a place to freely imbibe, Pickwick Tavern opened in 1934. It stands in its original space on Cherry Street and is otherwise virtually unchanged from when the door first opened. Sure, it offers no frills, but therein lies the charm. Stop in for a Fosters, Killian’s Red, or PBR, and don’t forget your cash.

The now-defunct Diversions may have been earlier on GR’s LGBTQ+ scene, but Rumors Night Club, dating back to 2003, definitely holds its own. From drag queen divas to go-go dancers to DJs, this premier night spot is a strobe-lit go-to. Performances, amateur shows, pageants and specialty nights are highlights at this friendly Division Avenue favorite.

Bell’s Brewery is hailed as the oldest and largest independent craft brewery in Michigan. The Kalamazoo brewery sold its first commercial beer in 1985 and was the first in the state to open an on-premise pub. Though the main facility and Eccentric Café operate in Kalamazoo, the beers themselves have been a staple in Grand Rapids for decades. Hey, who remembers when Oberon was called Solsun?!

Though it’s moved around a bit since 1953 — with its most memorable former location within John Ball Park — Circle Theatre remains a constant source of entertainment in the community. Now located on the Aquinas College campus, its Main Stage shows, plus the Summer Concert Series, family-centric Magic Circle, and more, all offer high production value and enriching educational experiences.

Before there were barbecue joints on every corner, there was Z’s, tucked in its own niche in downtown GR. Since 1982, they’ve been serving their award-winning ribs and house-made sauce, and catering to the early happy hour and late-night crowds. Karaoke is on tap several evenings during the week, as are a large selection of beers and liquors.

If you’re a native or an old-schooler, you might recall when Grand Rapids Public Museum lived on Jefferson Avenue. That location, founded in 1854 and the oldest museum in Michigan, is now the Public Museum High School. The current site earned its new home in 1994, and boasts a riverfront view and wide-open space to explore the many exhibits — plus a working carousel and out-of-this-world planetarium.

If you were one of those scavenging thrifters back in the day, you probably ran into Peri Olson, who now owns and operates Flashback. Since 1998, the store has been a beacon for those who seek out the funkier side of life. Filled with retro finds, costumes, and vintage clothing and accessories galore, there’s plenty of expertly curated inspiration to be found — on the racks and in the window displays.

When it opened in 1977, Wolfgang’s was the first of its kind; an “only breakfast” restaurant in Grand Rapids. They’ve since expanded their menu to include other meals, but let’s face it: When you think of this “Eastown Original,” you think strawberry-topped waffles or Benedicts or potato skillets — all day. Yum!

Where else? Well, don’t forget Wealthy Theatre for movies, concerts, speaker series, and more; Wenger’s two-floor, 16-lane alley for league and open bowling, plus private parties; Pietro’s for a taste of authentic Italian dishes, like Fettucine Michael (mmm); Fountain Street Church as a resource for spirituality, inquiry, and social action as well as vibrant music programs; and Frederik Meijer Gardens with its blooming grounds, indoor and outdoor artwork, special events, and summer shows.

As the city reopens, these and so many more businesses around town will need you to help keep them running — for years to come.

Tweet
Published in Best Bets
More in this category: « Casino Contingency The Great Outdoors »
Login to post comments
back to top