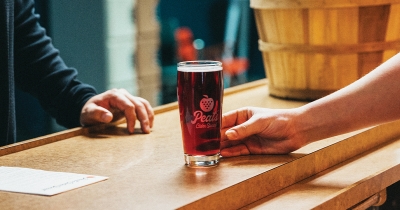 We all need to settle down someday — the Peats just didn’t expect it to happen in a bowling alley.

They were driving past Lakeshore Lanes and saw the big bowling ball sign, and Leah Peat made a quick joke to her husband, Dan, about changing the ball to an apple and setting up shop there. The duo had been making cider for years and distributing in the area, and they were actually looking for a nice, small outpost to have intimate tastings.

Instead, they have a 16-lane bowling alley and a large tasting room with extra space for events, all at Peat’s Cider Social in Stevensville. It’s spacious, family-friendly and mere seconds from I-94 — a perfect stop on the way to or from Chicago.

Of course, opening a business with “social” in the name mere weeks before COVID-19 hit Michigan was hardly an ideal launch. They were around just long enough to establish some bowling leagues and test out the tasting room when everything shut down.

Many businesses are welcoming back regulars and gaining steam as the vaccines roll out, while Peat’s is practically starting fresh amid a slow recovery. Still, I have no doubt they’ll become a community staple, because no one’s doing it like Peat’s.

As far as Dan Peat can tell, this is the only cidery and bowling alley combination in the world. And this cider goes far beyond apples, though it all started with the flagship flavor, The Huntsman. “That’s the one we had out in the market, and it’s really intentionally designed to be middle palate,” Peat said. “There’s enough dryness to it that it’s not going to drive away beer drinkers. We want to err on the dry side with pretty much everything, but then still have enough sweetness to it that it’s not going to push people away.”

Innovated by Head of Production Eddie Hengesh, the general approach to cider at Peat’s is inspired more by the beer world than the wine world, aiming for highly creative and nuanced flavors, along with collaboration in the industry.

This is exemplified by this year’s anniversary release, The Hi-Hat. It’s a 12% ABV cider inspired by a Manhattan. It was initially intended for last year, so it’s now aged two years in barrels used for Journeyman Distillery’s Not A King Whiskey, which is their premium rye. Then Hengesh finished it all off with Luxardo cherries and spices and put it on nitro, for a cider that’s essentially a cocktail on tap.

Other flavors include The Professor, a sweet and juicy cider with red plum, and The Golden One, made with carrot and turmeric. Living in Southwest Michigan, there’s no shortage of fresh produce, not to mention the Peats’ own 200-acre family farm that kicked off the whole cider enterprise.

They’re making use of that farm now by helping to test out a number of apple varietals, which will be ready for tasting in about five years. Whatever variants make great cider will then be planted en masse for future drinks, which means the best may be yet to come.

While they look forward to the future, the Peats haven’t left the past in the dust. The tasting room’s design draws inspiration from Lakeshore Lanes’ vintage blueprints, photography and marketing materials. Their promise to stay true to the bowling alley’s spirit is part of what helped Peat’s win the property, and the former owners stay in touch to help with any mechanical issues.

That includes the retro scoreboards, which the Peats would love to keep around as long as they’ll work. Along with the alley, they’ve also kept the arcade games, giving kids plenty to do while adults sip their cider. And one piece of history that’s helping now is the ventilation system, originally designed to clear out all that pesky cigarette smoke.

There’s also a party room, which gives plenty of options for private events. “If are looking to book something pretty unique, that has things for both grownups and kids, we’ve been starting to put on the books, a lot of birthday parties, retirement parties, work outings, etc.”

While there’s no kitchen, you can have food catered in for your event, or you’ll likely catch a food truck in the parking lot.

Whatever you come to Peat’s Cider Social for, it’s a refreshing, unique, nostalgic experience with creative and delicious cider.

Another new taphouse in West Michigan is Pux Cider! Well-known and loved for their creative offerings like Pomander, an orange liqueur-soaked bourbon barrel cider with clove, Pux recently opened their taphouse at 311 Fuller Ave. NE, Grand Rapids. It’s next door to Cheese Lady, which makes a perfect pairing in our opinion, especially with Pux patio for cider in the sun!

Tweet
Published in Best Bets
More in this category: « Treat Yourself Vin au Naturale »
Login to post comments
back to top