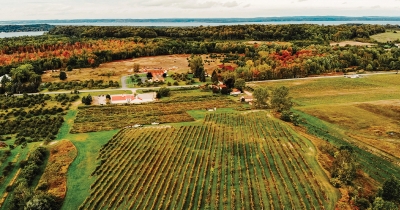 Forget the alchemy of water to wine and behold the miracle of grape to glass. Just look at a grape: nature’s humble oval endowed with its own fermentation system. Watch as the fruit spoils and the real fun begins.

It only takes a jostle to spill a grape’s juice, wherein its sugar reacts with yeast and voila, wine is born. Easy in theory, but it does require a deft shepherd to guide the liquid to its ultimate form.

Neu Cellars, a micro-vineyard and natural winery based on Traverse City’s Old Mission Peninsula, finds beauty in this hands-off approach with grapes. For owner John Keller, it’s all about stewarding the right circumstances for the fruit to transform on its own, and he takes pride in his place in the process.

“I like to call myself a babysitter of grapes,” Keller said.

Of course, operations at Neu are a touch more complicated than grape daycare, but in some ways they’re honestly not. Keller’s methods align with many a natural winemaker: grapes ferment on their skins with no additions, no subtractions. He jokes that if there was an ingredient label on his bottles it would simply read, grapes.

Cheeky, sure, but Keller trusts in his fruit to speak for itself, and if you’ve had the chance to try his wines you know they certainly talk the talk. But Keller’s relationship with winemaking wasn’t always this way.

As a young 20-something, fresh out of Ohio State with a biochemistry degree, Keller shipped out to Sonoma Valley to cut his teeth at Ravenswood Winery, an institutional vineyard that started small in the ’70s but had since exploded into a commercial success by the time Keller arrived. Instead of getting his hands dirty in the field, Keller found himself relegated to lab work and number crunching, a cog in the machine of this massive production facility. It didn’t take long before an epiphany popped like a cork.

“I was working in the lab providing some of the data they’d work with, when I just realized … I moved 2500 miles away, I have no family out here, no friends, chasing this dream, and this is exactly what I don’t want to do,” Keller said.

While he gained heaps of knowledge at Ravenswood, the position largely disillusioned Keller with the industry, so he ditched California and returned home to Cincinnati where he got a gig at Pleasantry, a forward-thinking restaurant with the Midwest’s first and finest natural wine program. There, he drank bottles that ignited forgotten pleasure centers with alive, electric wines that danced on his palate. These experiences gave spark to what Neu — German for new, fresh or young — would become. “I choose to consume and make wine that shows life; young, unaltered wine, something that shows a timestamp of recency.”

Ohio isn’t exactly known as grape country, so when it came time to find a place for harvest Keller had to venture elsewhere — but he knew right where to look. He and his family had vacationed up in Northern Michigan for more than 20 years, so he was well acquainted with what the area had to offer.

The Old Mission Peninsula sits about smack dab on the 45th parallel, similar to another famous grape growing territory: Champagne. Keller, a firm believer that a vintner is but a guest of his region, decided early on to embrace varieties compatible with the area. That means plenty of white grapes like Riesling and Chardonnay, but also some unsung reds including Baco Noir and Pinot Meunier. Keller also has a passion for bubbles, so he’s dedicated a percentage of his portfolio to sparkling wines.

While they don’t have a tasting room yet, the dream of opening one someday looms large over Neu. Keller’s dad, Bill, is a talented partner in crime and cellar hand, and lately he’s shifting his focus to the growing side of things. He bought 15 acres in Northport that the Kellers plan to plant on next month. Bill has been responsible for planning, designing and ordering for the vineyard as his career as an eye doctor in the greater Cleveland area winds down. He’s hoping to follow his passion to the vines, so expect big things from Neu in the coming years

It’s great news considering the fervent reception their wines have received thus far. As a small vineyard producing roughly 2,000 bottles a year, it’s been tough getting hands on bottles before they sell out. Their spring lineup should be one for the books, so keep your eyes peeled for the release. A couple highlights should include a carbonic macerated orange Riesling and an inky carbonic Baco Noir, but all should be worth the price of admission.

At its core, Neu Cellars is an expression of the ephemeral arts, and this romance between man and grape isn’t lost on us. It’s about reestablishing a connection to a process that’s become overly mechanized and homogenized, and as Keller puts it, these supposedly “nouveau” techniques are actually patently old-school. For centuries, winemakers were at the mercy of the natural world. Sometimes, this means imperfections or unexpected results, but Neu Cellars seeks to keep that spirit of spontaneity alive.

“It’s a direct reflection of what life is — out of control,” Keller said. “It’s always a beautiful surprise to see what the wine becomes.”

Tweet
Published in Best Bets
More in this category: « Social Cider Garden Party »
Login to post comments
back to top