The Itinerary: 4th of July in West Michigan 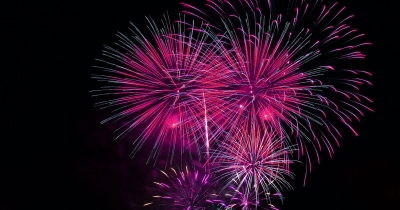 Especially independence from having to work on Monday! After days of storms, the week ahead looks to be friendly for beachgoing, patio dining, and most importantly: Fireworks.

While the actual 4th of July is on Sunday, many activities and fireworks will be going off Saturday night all over West Michigan. This marks a huge return after most people were forced to make do with their own exploding, sparkly things at home last year.

Believe it or not, there’s not much else happening this weekend, so here’s how to celebrate the 4th in the week ahead:

This huge show presented by Soaring Eagle Casino is starting at 6 p.m. with family-fun activities, food, vendors and live entertainment. The fireworks display will begin at 10:30 p.m., and while the best place to be is near Ah-Nab-Awen Park, any rooftop in GR will give you a solid view. Head to the website for more information on entertainment, parking options and road closures.

Both of these beach towns will have firework shows, with Muskegon lighting off at the waterfront on July 3. Saugatuck’s show will be visible from any of the town’s parks, going off at dusk on July 4.

At the Berlin Raceway, after the races on July 3, fireworks!

Ada is presenting a parade, classic car show and fireworks show on July 3.

Allendale is hosting a parade and park hangout starting at 10 a.m. on July 3, with fireworks at dusk on July 4.

Dorr has a parade, ox roast, tractor pull, live music and fireworks on July 3, plus a car show on July 4!

Grandville is partying on July 5, with WWII vintage aircraft, food vendors and fireworks.

Kentwood has a pancake breakfast, 5K race and fun walk, parade, carnival, beer tent, and fireworks at dusk on July 3.