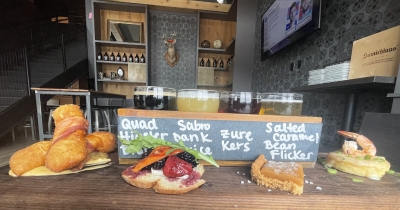 Events are back, baby!

You want to go to a festival? How about an INDOOR concert? Maybe a live, in-person theater performance! The world is your oyster.

Sidenote, we’ll never tell anyone what to do, but if you’re not vaccinated yet and need an incentive, how does $2 million sound?

The week ahead is full of great events, so let’s get into it.

The last of the Sunset Cinema sequel series features The Dark Knight, one of the most iconic films ever made. Experience the majesty of Heath Ledger’s incredible performance while sitting on the piazza (lawn) outside Studio Park, ideally with 3 of your friends! Grab a cocktail and some popcorn while you’re at it.

Circle Theatre is back with “Cabaret,” the legendary musical about cabaret performers, Nazis and hedonism — popularized by the 1972 movie starring Liza Minnelli. If you haven’t been to the theater in over a year like most of us, here’s a great starting point. And welcome back!

The Sovengard’s Late Night Street Food is back once again, this time featuring One Stop Coney. Head out to the biergarten for a street-food style hangout featuring chile dogs, vegan dogs, smash burgers and more! Keep it classic or get wild with a special flavor like the Elote Dog. Plus, there’s live music from DJ Jeff Finan. Cheers, and bon appetit.

Welcome to Arvon Brewing’s first-ever Sour Social! How does 14 sours sound to you? That includes slushies, heavily fruited kettles, and timed tappings. Many of them will be available only on draft, at this event, so pucker up and get over to Arvon’s taproom on Division!

This is one of the biggest festivals Grand Rapids has seen in a long time, coming to the baseball diamonds of Belknap Park. Korn, Rob Zombie, Chevelle, Pop Evil, Staind, Skillet and many more will rock West Michigan’s heads off this weekend.

After many months in the dark, The Pyramid Scheme is finally back with live music, and we couldn’t be happier. This weekend, check out this local band showcase with instrumental metal/post-rock/shoegaze band Tiny Tree, who have a new album coming out soon. Also performing is Lazy Genius, a relaxed rock n’ roll band.

Tweet
Published in Best Bets
More in this category: « The Itinerary: 4th of July in West Michigan The Itinerary: July 21-27 »
Login to post comments
back to top