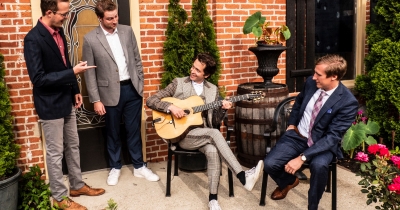 Djangophobique performing at GRAM on the Green. Courtesy Photo

Between drinks, animals and the beach, West Michigan is thriving this weekend.

As July comes to an end, we have plenty for you to do. Summer ain’t over yet! And if nothing on our list here looks appealing, consider trying a new restaurant, or going on a little road trip to your nearest beachfront town!

Here’s what we have planned for the week ahead:

Rosa Parks Circle may be under construction, but the front “lawn” of the GRAM is still open for fun times, including this concert series on Thursday nights. Free music, hands-on artmaking, food trucks and a cash bar, not to mention the Museum staying open late!

This week’s performer is Djangophonique with Via & The Playboys, performing amazing instrumental music focused around the guitar and other string instruments.

Cubi Market is essentially a farmers market you can shop from home, then pick up your order on a set date, when it's all been freshly gathered. This week, they're celebrating with an actual market featuring local merchants, street tacos from Chef Paul Mixa, games and live music. Mike's Famous Bean Dip, Field and Fire, Ferris Coffee & Nut Co., Fruitbelt Sparkling Tonic — these are just a few of the vendors at this outdoor event.

For a special few hours in the evening at John Ball Zoo, no kids are allowed. It’s all adults at this event featuring drinks, a Tex-Mex themed menu, and a whole lot of animals you wouldn’t normally get to see at this time of day.

Time to celebrate a (belated) 5-year anniversary!! Eastern Kille has seen a whole lot of change and a whole lot of growth since opening (now 6 years ago), and now they want you to be a part of it all. This parking lot party has a 5-year special edition rum release, a tiki-inspired cocktail menu, The Voice competitor Bradley Sinclair performing, and outdoor games.

If you’ve never been to the Coast Guard Festival, do you really live in West Michigan? This annual event is back with all the entertainment you could hope for. The carnival returns of course, along with live music, cardboard boat races, ship tours and much more. Not to mention all the great food and drinks already in Grand Haven.

7 Monks is paying tribute to one of Grand Rapids’ most beloved breweries, Speciation Artisan Ales. Come to the beer bar for a patio party with exclusive beers, specialty slushies, food specials, music and more. How does a cocktail-inspired smoothie sour sound? Or maybe a pineapple and hibiscus seltzer slushy.

Local Motu Viget Spirits is taking over Friesian Gastro Pub, Michigan street’s hottest new eatery, for a classic summer rooftop party. Come and join some of West Michigan’s most dynamic creatives & innovative entrepreneurs for an evening of networking & dancing to a soundtrack for the ages.

However, the party also celebrates PETS, so bring your pups out for a pet parade at 3 p.m. sharp. A portion of proceeds will be donated to the Humane Society of West Michigan.

Everyone’s been getting into homebrewing, but if you want to have something unique, tasty and gluten-free, make our own cider! This class is only $30 per person and includes a production facility, samples of Vander Mill cider, an instructional class on how to make your own cider, and five GALLONS of sweet cider to take home and ferment yourself.

Tweet
Published in Best Bets
More in this category: « The Itinerary: July 21-27 6th Annual Best of the West Results »
Login to post comments
back to top