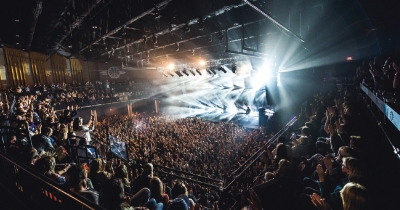 Finally returning to stages after 16 months away, live music has brought a genuine sense of joy and a surprising sense of normalcy back to West Michigan this summer.

So it feels almost too perfect to take this time to reflect on how over a year away from performing did, or in some cases did not, affect the results of our annual Best of the West music polls.

Featuring five music categories again this year, we only saw two repeat winners from last year’s results, with local vinyl institution Vertigo Music once again dominating as the most popular nominee out of any of the categories.

With more of the music listening experience becoming increasingly virtual and isolated than ever, it’s refreshing to see such a devoted love for physical releases, and a shop that has anchored our audio community for decades.

Solo artist Chris Cranick also returned as our readers’ top solo musician. Also the frontman for this year’s top original band, psych-rockers Overdrive Orchestra, Cranick has asserted control on our annual round-up. This win closely follows his second solo album, A Light Within the Dark, released in May.

He leads a completely different shortlist of solo artists this year that also includes Kalamazoo rap cellist Jordan Hamilton, and Grand Rapids’ Patty PerShayla, who recently teamed up as a touring member of Traverse City’s The Accidentals.

Behind Overdrive Orchestra in the Best Original Band category is GR’s Earth Radio, who appear on our list for the first time, following their latest album Reanimate, which took their future-soul sound to even more listeners online. Rounding out the category is Brena, who also top the Best Cover Band category, after coming in second there last year.

What’s most surprising when it comes to both band categories is the complete absence of rockers Trixy Trang, who topped both lists last year. But with the band cranking up plenty of shows this summer, there’s a good chance they’ll be back on our list next year.

And speaking of live shows, in the Best Music Venue category, fans missed the sweaty feel of The Pyramid Scheme’s in-your-face indie shows most of all, lifting the beloved club over larger longtime favorite locations The Intersection and 20 Monroe Live (now known as GLC Live at 20 Monroe), given none of them had hosted concerts for over a year. The most competitive category every year, look for these three venues, and many others, to really bring it as the swell excitement for live music continues to return.

Here’s a quick rundown of the final results. Did your favorites make the list?