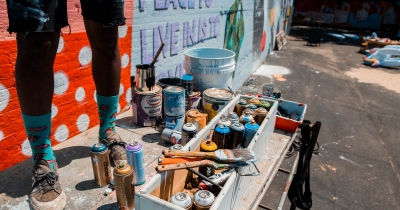 When exactly does fall begin?

Many people were saying it was on the first of September, especially since temperatures dipped the moment the month arrived. Others say it doesn't begin until the official date, September 22. And some might even say October is when it truly begins, though I've seen Halloween decorations up in my neighborhood already.

But you know what? In a way, it doesn't even matter! Because the events are going to happen either way — or at least, as long as rising Covid numbers don't get in the way.

That said, West Michigan has a whole lot of fun in the week ahead. Check it out:

AJR is a pop trio composed of three brothers: Adam, Jack and Ryan Met. Their music combines electric experimentation with indie pop, hip-hop and doo-wop, resulting in OK Orchestra’s first single, “Bang!” This tour is supporting the new album, which is big, bold and great to dance to.

Creston’s big art party — orchestrated by Lions & Rabbits Center for the Arts — is back again, taking over the street with fun for all. Come for the artisan market and kids activities, stay for the local food and drink, live music, public art and far more. It’s a block party celebrating art and inclusion.

Drag performances have quickly become a favorite pastime of Michigan — especially while dining and drinking. This show at Linear, presented by MI Drag Brunch, is no different. Your ticket gets you a plated meal, a signature drink and a 2-hour performance. What more could you ask for from a Sunday brunch?

More than a year after he was originally scheduled to perform, Michael Bublé — dreamboat, singer and songwriter — is finally bringing his silky-smooth voice to Grand Rapids. He’s won four Grammy Awards, sold more than 60 million records and had multiple singles, all from singing endlessly about love. His latest album, Love (stylized as the red heart emoji), features two singles, “When I Fall in Love” and “Love You Anymore.”

Anti-Flag are old-school punk rock, with a career going back to the ’80s. Their music has been radical from the start, with albums like Die For the Government and Their System Doesn’t Work for You, and now they’re coming to The Pyramid Scheme for an all-ages show with special guests Dog Party, Grumpster and Oxymorrons.

Tweet
Published in Best Bets
More in this category: « What’s Going On, September '21 The Itinerary: Sep. 15-21 »
Login to post comments
back to top