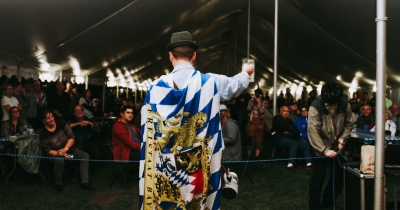 There’s no point in arguing it any longer: Fall is officially here!

The world is certainly cooperating, with temperatures careening into sweater weather in a matter of days. If you’re feeling a bit chilly all of a sudden, here’s my prescription: One warm apple cider, two Oktoberfests, and at least three orchard visits.

While Grand Rapids is still in the midst of ArtPrize, there’s plenty more to do all over West Michigan — festivals, comedy, music and more! Go ahead, put on your flannel and get outside.

Here’s what’s on our radar for the week ahead:

It’s Oktoberfest time! That means lots of German food, beer, music and dancing. Head to Riverside Park for this big event with tons of warm, malty beer you won’t get anywhere else, along with contests like Stein Holding, Keg Tossing, and the Dachshund Dash. Plus, live music with Delilah DeWylde, the Edelweiss Choir and more set the mood at this annual German party.

"Confluence is a 2-day multi-sensory festival that explores what’s possible when art, music, science, and technology converge." This weekend at Calder Plaza in GR, this event welcomes innovators, scientists, musicians, and entrepreneurs to share their work via conversations, art takeovers, and music showcases. If you're interested in the future, this is the event for you.

From his time as a correspondent on The Daily Show to his Netflix show Patriot Act, Hasan Minhaj has built a name as a talented comedian great at explaining and making fun of real-life happenings. From politics to religion, Muslim culture and daily life, he covers it all. Check out his new live tour, The King’s Jester, in-person at DeVos this month.

You already know whether this festival is for you or not. Do you love bourbon? How about having 100-plus whiskeys to choose from? This includes special high-end bottles, like Knob Creek 2001, Van Winkle Special Reserve and many more. There’ll also be food from El Caribe and Patty Matters food trucks, along with live music from Mark Warner. Plus, beer, wine and cider choices, in case you want to change it up.

This fest at the piazza at Studio Park will celebrate all the outstanding contributions of local African American artists through visual and performing arts. Expect dance, music, art, vendors, games and food, all reflecting the diversity of African American culture in Grand Rapids. It’s exactly the kind of party we need right now.

Blue October is an alternative rock band known for hard-hitting, emotional singles like “Hate Me” and “Into the Ocean,” which both hit the charts in 2006. Fans of Goo Goo Dolls, Breaking Benjamin, Shinedown, etc. will feel right at home with Blue October, who are now touring on their 10th studio album, “This Is What I Live For.” See them at The Intersection this weekend with support from Yam Haus.

Tweet
Published in Best Bets
More in this category: « The Itinerary: Sep. 15-21 The Itinerary Sep. 29-Oct. 5 »
Login to post comments
back to top