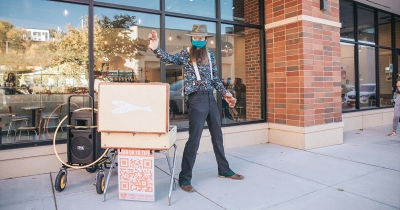 Lions & Rabbits is celebrating their anniversary with a glow-in-the-dark party, both inside and out. Expect kids activities, music, drinks, Street Chef Shaw, painting and more! Every dollar spent also supports Lions & Rabbits’ mission to spread art to the community through murals, classes, events and more.

Focused on inspiring new work from local artists, Rapid Art Movement challenges them to create pieces that can be displayed and performed on the move. Unlike traditional festivals which give rise to crowds as people flock to specific sites, RAM will have no fixed locations. Instead, it will take place in a geographic zone of ever-shifting activity within Grand Rapids’ Monroe North neighborhood. Visit to experience music, dancing, performance art, improv acting and more!

Time for a little fall cleaning! This event is like one huge garage sale, welcoming dozens of members of the community to sell their stuff at a stall. Join on Sunday to hunt for treasures, shop for good deals, and help re-home used belongings from your neighbors, friends, and community members. Weird art, rare records, vintage videogames and more will surely be up for grabs at the rummage sale.

With 10 multi-platinum albums and multiple top hits, from “Juke Box Hero” to “Cold As Ice,” Foreigner is universally hailed as one of the most popular rock acts in the world, boasting a formidable musical arsenal. On this visit, Foreigner is performing those hits with a full band and rock orchestra, bringing a whole new sound to the music.

Discover the ghost stories, urban legends, and paranormal stories hidden in the shadows of Downtown Grand Rapids on this wickedly funny, hauntingly memorable walking tour. Each tour lasts around 2 hours, and takes place within the Downtown Refreshment Areas, which means you can grab an adult beverage and take it along with you. A special late-night tour will be featured on the 23rd at 10 p.m. This includes some additional mysteries and surprises!

August Burns Red are metalcore legends, and they’re revisiting the 2011 album Leveler on its 10th anniversary. The band already released an anniversary edition of the album with guest musicians, alternate tunings and new guitar solos. Now they’re bringing the show to Grand Rapids with this anniversary tour, featuring special guests Fit For A King, ERRA, and Like Moths to Flames.

If you haven’t heard the news: 20 Monroe Live is now called GLC Live at 20 Monroe! As for this show, All Time Low are an iconic pop punk and rock band who helped define the scene in the 2000s with hits like “Dear Maria, Count Me In.” Now they’re visiting Grand Rapids, in part to support their sixth studio album, Future Hearts, which came out just weeks into the pandemic. Special guests nothing,nowhere. and Meet Me @ The Altar open the show.

Free Throw are an unabashedly proud emo rock band, employing a mix of Midwest emo like Algernon Cadwallader and big pop punk groups like Fall Out Boy. They’re coming to The Pyramid Scheme in support of their new album, Piecing It Together, along with special guests Dogleg and Charmer.

Let’s see: two free drinks, five venues, a crazy after party at Flanagan’s, and a $1,000 costume contest? Sounds like a deal to us! This bar crawl starts at Tin Can and spans multiple downtown locations, including Dublin Hall, Grand Woods Lounge, New Holland Brewing’s The Knickerbocker, Social House and more. Put on your best costume and forge your own path, meeting and drinking with new people all along the way.

We all love drag brunches now that we know how fun they are, and the only thing that can make them better is a great theme. These Halloween shows will of course be quite spooky, so bring a costume and prepare for two hours of fun, food, drinks and dancing.

Tweet
Published in Best Bets
More in this category: « The Itinerary Oct. 6-12 Halloween 2021 Itinerary »
Login to post comments
back to top