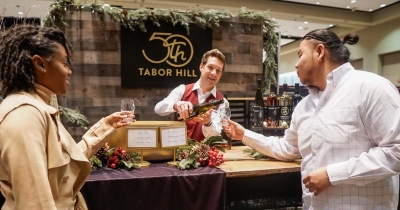 The last weekend before Thanksgiving is absolutely packed with things to do!

The sky may be grey and the weather may be cold but West Michigan is here to entertain nonetheless. Festivals, comedy, music, and your favorite shows come to life—there’s something for you to love.

Let’s get right into it. Here’s what’s on our radar for the week ahead:

This annual festival is sponsored by Revue, and features more than 1,000 beverages with a whole hall for the best wine from around the world. It was named a “Best Fall Wine Festival” by Forbes for a reason. This fest is also a beer buff favorite, thanks to dozens of Michigan’s best craft brewers coming together with unique, tasty and rare brews. You’ll be in heaven with so many options to choose from, not to mention food, craft cider and spirits. and hundreds of wines. Cheers!

You don’t need to wait ‘til Christmas to give your gifts: MasterChef is the ultimate show for the foodie, featuring the best home chefs in America — both young and old — in an exciting cooking competition with mystery ingredients and special tasks. Your foodie friend can experience it all live onstage with this show at DeVos, hosting past MasterChef contestants for an interactive and immersive evening of cooking challenges.

Danny Browning is a seasoned pro in the stand-up comedy game, having toured professionally for 20 years. A master at describing moments that make his life a nightmare, Danny’s stories are hilariously relatable. He’s a country boy at heart with a friendly sarcasm and sharp wit. Grab some friends and get ready for an exciting night out with an exclusive VIP booth with dedicated service.

Host of The Daily Show Trevor Noah is coming to Grand Rapids for a rescheduled stop on his Back to Abnormal tour. We live in a strange, new world, and Noah is an expert at commenting on it in a hilarious, incisive way. He’s been doing stand-up since long before the Comedy Central gig, so he’s a seasoned pro, happy to be back onstage at Van Andel Arena.

Joe Louis Walker, a Blues Hall of Fame inductee and four-time Blues Music Award winner, celebrates a career that exceeds half a century. Within the Blues world, he is described as a “living legend” and has performed at many of the world’s most renowned music festivals. Don’t miss his live show on the Franke Center’s intimate stage!

Tobe Nwigwe is an American rapper and signer who’s been posting an original song and video every Sunday since August 2016, collaborating with his wife, “Fat,” and his sister, “Nell.” His music has garnered a lot of attention, including Michelle Obama, who put his song "I'm Dope" on her workout playlist. See his Monumintal tour on one of very few stops, at The Intersection this weekend.

Tweet
Published in Best Bets
More in this category: « The Itinerary: Nov. 10-16 What's Going On: Holiday Edition 2021 »
Login to post comments
back to top