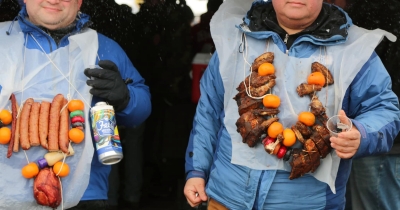 The snow may have melted but winter remains, with chilly but bearable temps in the week ahead.

Those temps will become especially bearable after a few beers in the belly, or maybe a big bowl of noodles. This weekend offers the opportunity for both, alongside excellent arts performances and fun parties.

Let's get right to it. Here's what's on our radar for the week ahead:

The Winter Beer Fest is back! This incredible beer festival is one of the biggest around, and every year they feature hundreds of fresh, local beers from Michigan's finest breweries, plus local music, performers, ice sculptures and carving demonstrations, fire pits to chase away the cold, and food available for purchase.

It's always a good idea to pregame, even if it's a full day in advance. This unofficial pre-party at City Built features an ice bear, outdoor games, hot eats, beer releases, free live music and more.

Grand Rapids Ballet kicks off our 50th Anniversary, reviving youthful memories from the classic fairytale, Cinderella, choreographed by renowned choreographer Ben Stevenson, O.B.E. This timeless story journeys alongside Cinderella as her dreams are turned to reality by her Fairy Godmother before she dances the night away with her Prince at a dazzling ball. The Grand Rapids Symphony performs Sergei Prokofiev’s melodic score, as the audience watches Cinderella’s story unfold, leading to her happily ever after.

In 1944, George Stinney Jr. was executed at the age of 14. Wrongfully accused of the rape and murder of two white girls, George became the youngest person legally executed in America. Stinney: An American Execution spotlights the agony of this injustice as it reminds us of our aspirations for an enlightened society.

Tweet
Published in Best Bets
More in this category: « From First Date to Anniversary: Date Ideas in West Michigan What's Going On, March 2022 »
Login to post comments
back to top