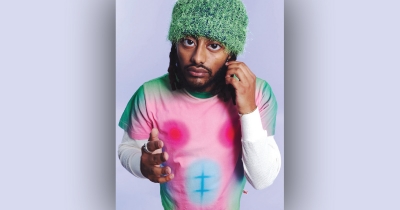 Break It Down | Make It Better

Local arts organizations are coming together to bring back Break It Down, Make It Better for its eighth year. This educational event promotes lifelong learning and strengthening local connections among West Michigan creatives, with panels and 14 different sessions covering valuable lessons like obtaining grants and busting through a creative block.

The GR Bourbon Fest is back with two sessions and over 200 whiskeys, a majority being bourbon. This is the ultimate festival for whiskey lovers, alongside other beverages, food trucks, live music, vendors and more! Plus, this event benefits Friends of the River, a local nonprofit working to improve water quality, access and awareness in Michigan.

Put your paws in the air and party with pets at the 10th annual Paws, Claws, and Corks gala hosted by the Humane Society of West Michigan. Savor food and beverage from West Michigan while bidding on top-notch auction items. All proceeds go towards the Humane Society’s mission to promote the humane treatment and responsible care of animals in the community.

Friendly reminder that Skelletones, Grand Rapids’ favorite all-ages music venue, is back! Okay, this one event is 18+, but that’s because Inferno Room is some creepy, dark, alternative drag entertainment — just the way we like it. Come through for a unique drag night featuring Velma Violet, Mizfit Martini and more.

Between the Buried and Me

Between the Buried and Me are legends of experimental metal, exploding in popularity with 2007’s Colors, which incorporates folk, polka, carnival music, country hoedown and much more into their death metal. Now they’re out on the Human Is Hell Tour, hot on the heels of Colors II, last year’s groundbreaking sequel. Joining the show is Car Bomb.

Aminé, a.k.a. Adam Daniel, is an American rapper and singer out of Portland, Oregon. The high-energy, multitalented rapper crosses genres and has fun with his music while also addressing big issues like incarceration and politics. Expect a fun night on The Best Tour Ever Tour.

With a 10th studio album coming out in May, Coheed and Cambria are headed on The Great Destroyer Tour, bringing their unique brand of epic rock and concept albums based on lead singer Claudio Sanchez’s sci-fi storyline called The Amory Wars.

LaughFest is back once again with all kinds of events all over West Michigan! The big headliners include Maria Bamford, Fortune Feimster, Brent Morin and more. There’s a huge variety of comedy going on, though, including Battle Bots Improve Comedy, the Clean Comedy Showcase, musical improv, a humorous trivia night and much more. Proceeds benefit Gilda’s Club Grand Rapids, a free emotional health support community of children, adults, families and friends on any kind of cancer journey, or those grieving a death due to any cause.

The Queen of Country is coming to Van Andel! Reba McEntire has built a multi-entertainment empire, but she remains at heart a legendary country music singer, known for huge hits like “Can’t Even Get the Blues” and “For My Broken Heart.” Expect favorites from across her whole career on this tour with special guest Reyna Roberts.

Come out for the best prices of the year at this Merchants and Makers Bargain Market, featuring 55 local makers, delicious food by Trillium Events, and listen to Plain Jane Glory. Every maker in attendance will have deals going on, whether it’s seasonal stock they have discounted, a percentage off of their entire booth, or sales on discontinued items — every item at the market is marked down in some way.

Hear the Talent of Juilliard

With unparalleled artistry and enduring vigor, the Juilliard String Quartet continues to inspire audiences around the world. Founded in 1946 and hailed by The Boston Globe as “the most important American quartet in history,” the ensemble draws on a deep and vital engagement to the classics, while embracing the mission of championing new works, a vibrant combination of the familiar and the daring.

Beyond the Eats
with Alton Brown

Alton Brown scares us a little, but that’s okay, because he’s also one of the world’s greatest chefs and food critics. Brown has created a new form of entertainment, a live culinary variety show, with his Edible Inevitable and Eat Your Science tours. Now he’s back with Beyond the Eats. Brown says fans can expect “more cooking, more comedy, more music and more potentially dangerous science stuff.” Critics and fans have raved about the interactive components of Brown’s shows. He warns, “Prepare for an evening unlike any other and if I call for volunteers… think twice.”

“Be our guest” as a quartet of Broadway, Disney Channel, and animated film icons celebrates all the Disney Princesses in an unforgettable evening of songs, animation, and stories. Fun for all ages, this show will give you unending nostalgia and entertain your kids as well, with talent like Tony-nominated Susan Egan, Grammy-nominated Courtney Reed, Disney Channel star Anneliese van der Pol and more.

Tweet
Published in Best Bets
More in this category: « The Itinerary: Feb. 23-28 Best of the West 2022 Has Begun »
Login to post comments
back to top