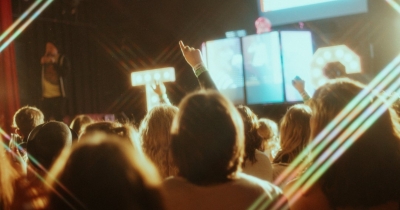 Taylor Swift Party. Photo by Will Smith, @illwill17 on Instagram

The grass is green, the sun is shining, the temperature hit 65. Spring has officially sprung!

Okay, maybe we haven't escaped winter yet, but this is West Michigan, which means there are still tons of events around town, especially if you love concerts and comedy!

We have great shows slated for this week, so if you don't feel like being out in the cold, head to your local venue and get warm.

Also, don't forget that Best of the West voting is NOW OPEN!!! Wahoo!

Here's what's on our radar for the week ahead:

We promise that you’ll never find another party like THE TAYLOR PARTY: TAYLOR SWIFT NIGHT, a professionally produced dance party for all the Lovers out there. This party is Taylor-made for ultimate fans as well as people who just want to dance. Surrounded by friends and Swifties, you'll dance the night away singing along to every song. So grab your crown and your crew, and come party, for evermore!

Friendly reminder that Skelletones, Grand Rapids’ favorite all-ages music venue, is back! Okay, this one event is 18+, but that’s because Inferno Room is some creepy, dark, alternative drag entertainment — just the way we like it. Come through for a unique drag night featuring Velma Violet, Mizfit Martini and more.

Put your paws in the air and party with pets at the 10th annual Paws, Claws, and Corks gala hosted by the Humane Society of West Michigan. Savor food and beverage from West Michigan while bidding on top-notch auction items. All proceeds go towards the Humane Society’s mission to promote the humane treatment and responsible care of animals in the community.

It’s not every year when a chart-topping rock band launches its full-scale tour in West Michigan. Let alone the hottest rock band to come along in years, who also just so happens to hail from our fair state. Get out your best glam outfit, and join Greta Van Fleet for two shows supporting the band’s latest album, The Battle At Garden’s Gate.

Okay, you might not get to say “hello” directly to Tig, but you can at least yell it out when she walks on stage! Tig Notaro is an Emmy and Grammy nominated stand-up comedian, writer, radio contributor, and actor as well as a favorite on numerous talk shows. Her comedy is soft-spoken, deadpan, and filled with love. She’s ready to see you on this Hello Again Tour.

With a 10th studio album coming out in May, Coheed and Cambria are headed on The Great Destroyer Tour, bringing their unique brand of epic rock and concept albums based on lead singer Claudio Sanchez’s sci-fi storyline called The Amory Wars.

Aminé, a.k.a. Adam Daniel, is an American rapper and singer out of Portland, Oregon. The high-energy, multitalented rapper crosses genres and has fun with his music while also addressing big issues like incarceration and politics. Expect a fun night on The Best Tour Ever Tour.

Tweet
Published in Best Bets
More in this category: « Best of the West 2022 Has Begun The Itinerary: March 16-22 »
Login to post comments
back to top