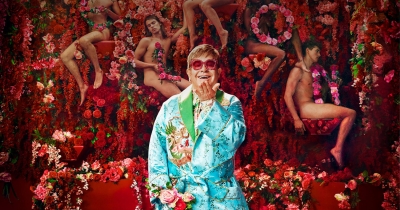 The West Michigan arts scene is out in full force this week.

While many businesses seem to be taking a break from events in the week ahead, that just leaves more time for you to see and hear fantastic art, from galleries to jazz to Broadway musicals.

Before we dive into it, remember that Best of the West rages on and businesses would love your votes. Also, keep an eye out for April's Dining & Drinking Issue, arriving on newsstands this month!

Here's what we have on our radar for the week ahead:

After 50 years of performing on the road, Sir Elton John will be making a pitstop in West Michigan for his farewell world tour. The beloved musician’s entire discography will be celebrated by all in attendance, and fans can expect a truly comprehensive experience that they’ll remember for years to come. Whether you know every word to “Tiny Dancer” or “Philadelphia Freedom” (or both), you can count on your favorite tracks being played one last time, live on stage, by the Rocket Man.

Every month in spring and summer, Kalamazoo hosts an Art Hop, inviting people out to venues all over the city for art of all media, including canvas, film, music and beyond. For April's Art Hop, they'll be ushering in springtime in downtown Kalamazoo and celebrating the beauty of the natural world, one of the most enduring subjects for artists to capture. Join and look ahead to Earth Day (April 22), a reminder of the vital importance of protecting and celebrating Mother Earth.

In terms of pure musicality, George Gershwin was America’s Schubert. He composed with a creativity and skill that immortalized his art, and hardly any of his works is more embedded in the world’s musical consciousness than Rhapsody in Blue, originally described by Gershwin as a “symphony” for piano solo and jazz band. This extraordinary chamber music program pays tribute to great composers who crossed the bridge between the classical and jazz idiom, with dazzling results.

The Room isn't just any movie, it's one of the best bad movies ever made, even spawning a sort of "making of" movie starring the Francos. Fans are vocal, especially at live screenings like this one. Watch it at home first, with the captions on, then come to Wealthy Theatre for an interactive night of yelling at the screen, quoting along with the movie, throwing plastic spoons, and tossing the ol' pigskin around. Sound wild? It is.

The Grand Rapids Children's Museum is your Spring Break destination! Join for a week full of extended hours, special performances, presentations, and all the museum fun. This week of events features painting, story time, live music from other cultures and much more. Check the schedule to see the best day for your child's interests.

An electrifying new musical that follows The Temptations’ extraordinary journey. AIN’T TOO PROUD is the electrifying, new smash-hit Broadway musical that follows The Temptations’ extraordinary journey from the streets of Detroit to the Rock & Roll Hall of Fame. With their signature dance moves and silky-smooth harmonies, they rose to the top of the charts creating an amazing 42 Top Ten Hits, with 14 reaching number one.

"COME JOIN OUR SISTERHOOD!" Four women at a lingerie sale have nothing in common but a black lace bra and memory loss, hot flashes, night sweats, not enough sex, too much sex and more! This hilarious musical parody set to classic tunes from the ‘60s, ‘70s and ‘80s will have you cheering and dancing in the aisles. See what more than 17 million women and fans worldwide have been laughing about for 20 years! It’s a hilarious celebration of women and "The Change."

Tweet
Published in Best Bets
More in this category: « What's Going On This Week: March 23-29 What's Going On, April 2022 »
Login to post comments
back to top