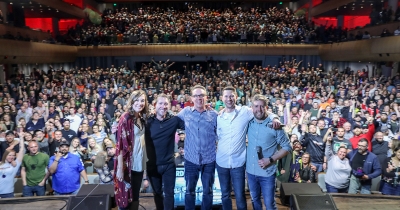 Big events, happenings and goings-on in West Michigan this month.

After 50 years of performing on the road, Sir Elton John will be making a pitstop in West Michigan for his farewell world tour. The beloved musician’s entire discography will be celebrated by all in attendance, and fans can expect a truly comprehensive experience that they’ll remember for years to come. Whether you know every word to “Tiny Dancer” or “Philadelphia Freedom” (or both), you can count on your favorite tracks being played one last time, live on stage, by the Rocket Man.

Feeling dreamy? LOW is for you. This indie rock, dream pop band has been around since 1993 and crushing it the whole time, with impressive live performances powered by crunchy guitars and powerful vocals. Hot off their latest release, Hey What, LOW is coming to the Pyramid Scheme, so set your expectations HIGH.

After a long period of success opening for popular country artists like Chris Young, the Eli Young band and Florida Georgia Line, Chris Lane has since cemented himself as a country music mainstay. Now, his new single “Fill Them Boots” is inspiring a world tour that will take fans back through Lane’s whole discography, while still making room for some newer tracks. Folks, get ready to two-step.

The spring season of our Grand Rapids Comic Con has returned! Hosted at the DeltaPlex Arena, this comic con ‘Spring Fling’ will be the #1 stop for all things nerdom: From comic books to cosplay, and with special guest appearances from your favorite voice actors and actresses, this event surely has something for everyone. And as always, this Grand Rapids Comic Con encourages crowds of all-ages to attend, offering a variety of events and booths that excite both kids and the kids-at-heart. “Excelsior!” - Stan Lee

Everyone’s favorite 97.9 WGRD radio show, the Free Beer and Hot Wings Morning Show, is coming to downtown GR for an exciting live show experience! Regular listeners can expect their favorite segments from the show to happen right onstage, including Dumber Than The Show Trivia, and more local news and commentary will be shared by the whole crew of hosts. Audience members may even be invited to come up on stage and join the show! NOTE: No free beer or hot wings will be provided.

Comedian, podcast host, and Netflix comedy special veteran Tom Segura will be visiting Kalamazoo, as a part of the second leg of his ongoing “I’m Coming Everywhere” tour. While Segura may be best known for his appearances on the aforementioned streaming service, he also has credits toward popular television and variety shows, from The Late Show with Stephen Colbert to Workaholics. Come by to see Segura’s famously deadpan humor live on stage.

Been wanting to celebrate the return of local music venue Skelletones, but can’t decide on which show to see? Look no further than their upcoming Michigan Metal & Hardcore Fest. This all-day event features 12 midwest-based bands, including Grand Rapids’ own Worst Self and Gorethrone. Plus, 20 percent of ticket proceeds will go toward The Trevor Project, a 24/7 crisis support service for LGBTQ+ young people. That truly rocks!

Following the recent RIAA gold certification of their 2018 album, “Attention Attention,” the Florida rock band Shinedown will be bringing their high-energy, eye-popping show to downtown Grand Rapids. The same album’s title track reached Top 5 on Billboard 200, and the group’s seventh album debuts the same weekend as their Van Andel performance. Suffice it to say, it has never been a better time to be a Shinedown fan, new or old.

Whether you have heard his hit songs “Love Cycle” and “Truth Be Told” on shuffle, or you purchased “Poetic Pan” as it made #17 on the Billboard 200 during quarantine, there is no denying that rapper Toosii is in the midst of skyrocketing success and recognition. This North Carolinian artist has been featured on tracks with Lil TJay, and his record company also represents the globally known Da Baby. However, Toosii’s performance at The Intersection is a solo act, and one we cannot wait to see.

Folks may remember Pauly D from his time on the iconic MTV series, Jersey Shore, but what many may not know is that this actor is also a musical artist. DJ Pauly D has released multiple well-performing singles and EPs over the past decade, including his 2019 single “Silver and Gold.” And while crowds may not necessarily hear any new songs from DJ Pauly D at this Intersection performance, they can surely expect to enjoy some good music with their favorite TV personality up close and onstage.

The Grammy-nominated blues rock band out of Iceland is celebrating their 10 year anniversary, and there’s never been a better time to see this celebrated group in-person. Kaleo’s latest album, Surface Sounds, debuted nearly one year ago. So, fans of Kaleo (and newcomers alike) can expect a wide array of past favorites, from “Way Down We Go” to “Backbone,” along with some fresh sounds. Be ready for some ice-cold rock at their all-ages show.