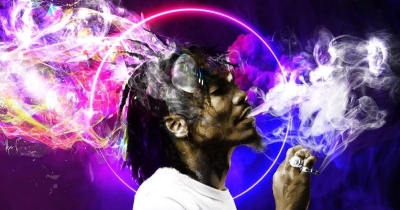 Our new favorite holiday has arrived: It’s 4/20 in West Michigan.

Just about every cannabis company on Earth has some sweet deals going for 4/20, so we’re not going to bother listing all those here. Our advice there is simply to support local as much as you can!

This special cannabis holiday also means tons of parties, though. Concerts, giveaways, art, games, stand-up comedy and more are all joining the festivities, so we’ve rounded up some local highlights here. And even if you’re not interested in local 4/20 events at all, you can scroll to the bottom for some great events coming up this weekend.

Here’s what’s on our radar for the holidaze:

Green Mitten is a local lifestyle brand and CBD store celebrating their 10th anniversary on 4/20, with a show from legendary Flint rapper Dizzy Wright, local rappers Packy and Ajax Stacks, and more. Come on through for a big party!

What’s better than a party? The after party. Following the Green Mitten Anniversary show at the Pyramid Scheme, come join the boys, Dizzy Wright, Ajax Stacks, and the rest of the gang at Ambiance GR in celebration of a blessed decade for all! Joyology will be heavy in the building giving out a free pre-roll to everyone with a ticket stub from the concert. They will also be blessing up to 50 people with FREE Uber rides home! If that wasn’t enough, Ajax Stacks, Dizzy Wright, and Phillip Wolf will be shooting music video scenes for their new single "Way Before".

This ain’t your auntie’s paint and sip! Join local drag queen and artist Star Buxom and one of their drag queen friends for a paint and sip like no other! You’ll be painting a punny Seaweed painting in honor of 4/20 and our favorite legalized plant. Get ready for crude humor, vulgar language, messy sing-alongs, strong drinks, and fabulous art. Your ticket includes soda, an order of fries, all painting supplies and “a damn good time.”

Grand Rapids’ only 100%-local owned cannabis shop is going all-out for 4/20. Come early for the grill and “Puff n Paint,” as well as swag giveaways and deals. Then stay for the toke lounge, a game, and four amazing stand-up comedians performing a totally free show. Time to get lit, together!

Come on out to New Standard for not just free music from local band Desmond Jones, 420 scratch and win cards, and great deals all day.

Join us next door to the Grassy Knoll to check out art from over 10 local vendors! Featuring live music from DJ PRIM, support from JOLO The Rebel Kid, with a guest appearance from Alexis Taylor country music artist. They will have a 9-basket putter disc golf course, casino games, a joint-rolling competition, prizes, demonstrations, Noah Project animal rescue adoptions, Free Cannabis swag, and munchies! Not to mention a giveaway with West Michigan Cannabis Guild.

What better way to celebrate 4/20 than with drinks and munchies? Blue Dog Tavern is going to be selling their dankest, hoppiest beers around, alongside cocktail specials like Bong Island and the Stoner Punch, and food items like Pulled Pork Mac and Cheese Nachos, and Hot Diggity Dog Pizza. Come, sit, chill.

It’s our first 4/20 under new ownership and we have a very special and unique experience curated for cannabis culture enthusiasts. A cannabis plant will be playing music live at Purple East and will be jamming along with its grower Tom Wall! The plant, named “Cosmic Splooge”, will be plugged into a computer that reads its bio-electric energy to produce music and it actually jams in proper time and makes tasteful melodies along with human musicians. Of course, the event will also feature tons of deals and free gifts.

What better way to celebrate 4/20 than with a brand new dispensary opening? Come on through for complimentary breakfast and refreshments, specials on prerolls/flower/concentrates/vapes, free cannabis delivery and more.

Been wanting to celebrate the return of local music venue Skelletones, but can’t decide on which show to see? Look no further than their upcoming Michigan Metal & Hardcore Fest. This all-day event features 12 midwest-based bands, including Grand Rapids’ own Worst Self and Gorethrone. Plus, 20 percent of ticket proceeds will go toward The Trevor Project, a 24/7 crisis support service for LGBTQ+ young people. That truly rocks!

Following the recent RIAA gold certification of their 2018 album, “Attention Attention,” the Florida rock band Shinedown will be bringing their high-energy, eye-popping show to downtown Grand Rapids. The same album’s title track reached Top 5 on Billboard 200, and the group’s seventh album debuts the same weekend as their Van Andel performance. Suffice it to say, it has never been a better time to be a Shinedown fan, new or old.

Whether you have heard his hit songs “Love Cycle” and “Truth Be Told” on shuffle, or you purchased “Poetic Pan” as it made #17 on the Billboard 200 during quarantine, there is no denying that rapper Toosii is in the midst of skyrocketing success and recognition. This North Carolinian artist has been featured on tracks with Lil TJay, and his record company also represents the globally known Da Baby. However, Toosii’s performance at The Intersection is a solo act, and one we cannot wait to see.

Tweet
Published in Best Bets
More in this category: « What's Going On This Week: April 13-20 Right Up Your Alley: Bowling in West Michigan »
Login to post comments
back to top