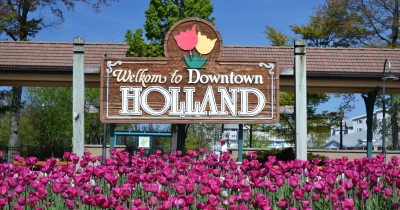 Events, happenings and goings-on in West Michigan for May 2022.

Don’t ever stop believing. One of the most influential rock groups of all time, Journey is hitting the road again in their 2022 Freedom Tour, alongside very special guest TOTO. The evening’s show will see lots of classic hits and favorites throughout the night, but also some exclusive performances of the group’s new album, FREEDOM.

For so many musicians and artists, work seemed to stop right when COVID-19 hit in early 2020. After the breakthrough success of his 2018 single “Let Me Down Slowly” and 2020 debut album “These Two Windows,” singer-songwriter Alec Benjamin is eager to perform live for his fans once again. Need your daily dose of folk-pop and indie? You’ve come to the right place.

Since 1929, the city of Holland has blossomed with literally hundreds of thousands of tulips — and an equal number of tulip-lovers who attend the annual Tulip Time Festival. But the celebration is so much more than tulips, with national entertainment acts, events and activities for all ages, along with sights of the shores of Lake Michigan and some of the largest parades around.

May is a packed month for local, live music, so don’t forget to celebrate our venues! The famous Pyramid Scheme music venue and bar will be turning 11 this year, and their anniversary party will be lots of fun, with guest performances from Mustard Plug, Pilfers and Bumsy & the Moochers (all amazing names).

Eve 6 is one of those rock bands that blew up in the ‘90s and then disappeared for a bit. Hit singles like “Inside Out,” “Here’s to the Night,” and “Leech” made them big, and now they’re back with a highly active Twitter presence and a political message, hence the name Extreme Wealth. Supporting are ska punk band We Are the Union and comedian Jake Flores.

A veteran of both the stage and screen, comedic mastermind Patton Oswalt is traveling to Grand Rapids for one night only later this month. Appearing in iconic television shows like King of Queens, Seinfeld and Parks & Recreation, now is your chance to see this fan-favorite character actor live on stage at 20 Monroe!

Fitness, figure, physique, wellness or even bikini — no matter which category of competition in NPC Bodybuilding is your favorite, all of your favorite local lifters will be present at the state finals and national qualifier at the end of this month. Come see the amazing things the human body can do, and don’t forget your protein powder!

The West MI Womxn’s Fest offers a platform to connect, share, and engage with the local business forum and leaders within the community. The event offers a safe space to highlight diversity within our community and empower women and those of all expression to grow and succeed in today’s business arena. This is a family-friendly event with live music performances, artist and vendor markets, panelists, and speakers.

Doug Martsch formed Built To Spill in 1992, aiming to sustain a project that would involve a rotating cast of musicians to record albums and tour. Their latest release, Built to Spill Plays the Songs of Daniel Johnston, features songs derived from the band’s rehearsals during Johnston’s final tour in 2017 when they served as the late songwriter’s backing band.

Comedian, podcast host, and Netflix comedy special veteran Tom Segura will be visiting Grand Rapids, as a part of the second leg of his ongoing “I’m Coming Everywhere” tour. While Segura may be best known for his appearances on the aforementioned streaming service, he also has credits toward popular television and variety shows, from “The Late Show with Stephen Colbert” to “Workaholics.” Come by to see Segura’s famously deadpan humor live on stage.

The Grand Rapids Food Truck Association (GRFTA) is hosting this 4th annual Roll’N Out Food Truck Fest at Calder Plaza. Up to 38 food trucks and trailers will participate, along with a picnic space, gift card giveaways, live entertainment, family-friendly activities and much more.

Consisting of 7 different rising bands in the state of Michigan, this summer’s concert series with Frugthaven Farm (formerly Klackle Orchards) is sure to be one of their best. These outdoor concerts are a sight to see, especially with the farm’s lovely apple orchard close nearby. From indie pop to country, there is something for everyone.

Tweet
Published in Best Bets
More in this category: « Right Up Your Alley: Bowling in West Michigan Hot off the Pasture: Farmers Markets in West Michigan »
Login to post comments
back to top