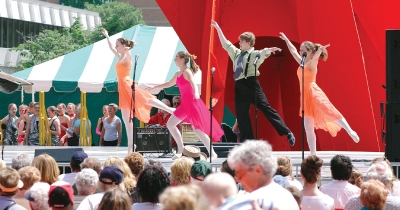 Festival of the Arts. Courtesy Photo

Events, happenings and goings-on in Grand Rapids and West Michigan for May 2022.

Festival of the Arts

An incredibly important part of West Michigan history and culture, Festival of the Arts is the annual three-day celebration of the arts held in downtown Grand Rapids. The first Festival in 1970 highlighted the 1969 installation of Alexander Calder’s La Grande Vitesse on what is now known as Calder Plaza. Today, Festival attracts thousands of families downtown, with the best area performers and artists, exhibits, activities for kids, and of course, great food.

Now is your chance to get up close and personal with some of Earth’s most legendary prehistoric creatures (and some dragons, of course!  In an impressive combination of animatronics and sound effects, the team behind Dino + Dragon Stroll has created an immersive, hands-on experience for all ages. The DeltaPlex Arena will also be hosting sensory-friendly sessions early in the morning on Saturday, with sound and light adjustments to help make the whole environment less stimulating or overwhelming.

What do you get when you mix a capella with country music? Vocalists Austin Brown, Rob Lundquist, Adam Rupp, Tim Foust and Adam Chance have been answering this question for nearly two decades now with their powerhouse group, Home Free. The five have won music competition shows like NBC’s The Sing-Off, and they’ve even collaborated with Southern gospel royalty like the Oak Ridge Boys. Mixing Nashville country standards with their own up-and-coming originals, Home Free continues to raise the bar.

Chvrches are an incredible electronic pop band out of Scotland, producing unique music unlike the typical pop you hear on the radio. It’s upbeat, energetic music that’s not always about the happiest subjects. This tour comes after Chvrches’ latest album, Screen Violence, addressing feelings of loneliness, disillusionment and fear.

With 22 years of stand-up comedy experience under her belt, Leanne Morgan is finally gracing Grand Rapids with her relatable, hilarious storytelling and Southern charm. While being someone who’s always felt drawn to perform and get people laughing, Morgan did not consider pursuing comedy until her experience selling jewelry at various house parties in Tennessee. She couldn’t help but tell jokes and stories about herself, being a mother of three, and married life to her prospective customers. After one fateful incident with a pee-stained couch following a particularly gut-busting joke, Morgan left retail behind and never looked back.

Travel to Asia and the Pacific Islands in the sixth year of the annual GR Asian-Pacific Festival. Visit for 30-plus vendors, diverse entertainment,  VIP options, and the dedicated immersive experiences: Pacific Island and Hmong Night. Plus, interactive areas and photo areas, workshops, and community booths. Start the day with morning yoga, then enjoy a massive selection of diverse cuisine and drinks, both savory and sweet, then enjoy fantastic entertainment from around the world.

Time to celebrate City Built Brewing’s fifth anniversary with a hugely epic event on the Sixth Street Bridge. Come through for a party on the bridge (closed to traffic) featuring live music, a beer festival and food. It’s not just City Built’s beer, there will also be Transient, Arvon, HOMES and many more — not to mention multiple bands playing throughout the day and a variety of food trucks.

Get Sad: It’s An Emo Night

Get Sad is back again with a sixth “volume” of classic pop-punk, emo and other songs from your formative years. This emo night celebrates a blast to the past — depending on whether you even stopped listening to this kind of music. “It’s like a dance party. But with more angst. And sadder.” Plus, this event supports the GR Pride Center!

WELCOME TO NIGHT VALE is a twice-monthly podcast in the style of community updates for the small desert town of Night Vale, featuring local weather, news, announcements from the Sheriff’s Secret Police, mysterious lights in the night sky, dark hooded figures with unknowable powers, and cultural events. Turn on your radio and hide — or, come see this surreal yet hilarious show in person at Fountain Street Church!

The festival you never knew you wanted but always knew you needed. Undeniably Dairy presents the 4th annual Mac & Cheese Festival highlighting local food vendors for their unique take on mac and cheese along with a variety of beer samples and even milk stations on the field.

Chris Rock won’t let a little smack to the face get him down. The legendary comedian is, in fact, embracing “ego death” in his latest comedy tour, heading to Soaring Eagle this month. In the show, he talks politics, pop culture, the state of the world, family life and more with his expressive signature style.

One of the biggest annual tours in North America, Willie Nelson’s Outlaw Music Festival show will be stopping in Grand Rapids with special performances from the likes of Brittney Spencer, Charley Crockett and more. Celebrate the musician, actor and activist’s legacy in-person just a month after his 88th birthday.

Made famous from the hit Netflix show “Cheer,” the collegiate cheer athletes of both Navarro College and Trinity Valley Community College will come to Grand Rapids for a one-night only performance unlike any other. Attempting never-before-seen stunts and stage performances not shown on the reality show, fans can expect their favorite cast members to show off their talents live and in-person on an impressively large scale.

Tweet
Published in Best Bets
More in this category: « Hot off the Pasture: Farmers Markets in West Michigan The Return of Grand Rapids Pride Festival »
Login to post comments
back to top