The 7th Annual Best of the West Winners 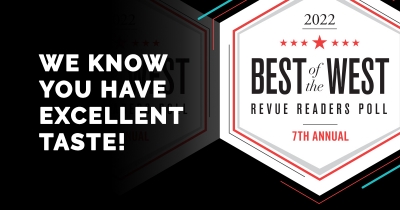 This year, we knew we had to change things up and keep it fresh. That’s why we introduced two big changes for 2022.

First, we had not one, but two rounds of voting this year! In the first round of voting, you could nominate literally whoever you want, as long as they fit the category and were local. In the second round of voting, readers had three finalists to choose from. After seeing a few of the same people win certain categories every year, we wanted to see if giving people some options would change up results.

After all, it’s much easier to vote from three choices than to pull a favorite business from your own memories. In the end, some results changed, many stayed the same. To be frank, some people told us voting twice was tedious, while others found the second round more fun. Who knows what we’ll do next year, but we welcome all feedback!

Regardless, the big upside of two rounds is more than double the voting. We had a record number of voters in the first round, and then even more in the second, resulting in over 12,000 voters combined. If you’re counting individual votes, we ended up with more than 340,000!

The second big change was our first-ever Best of the West Live, a huge party announcing the winners that has already happened by the time you’re reading this, but hasn’t yet happened as we write this. However, I’m sure it was amazing!

Oh, and there was a secret third change as well! This year we introduced the Golden Certificate, awarded to the nominee who won the Most Votes Overall across multiple categories.

Congratulation to the winners of our first-ever Golden Certificate award: Long Road Distillers!

Whether you’re a winner, a finalist, a voter or a Staff Pick, as long as you’re part of West Michigan, Best of the West is for you. We want to celebrate all of our readers’ favorite people and places around town so that even more people can check them out and give them the love they deserve. Cheers!

HERE ARE YOUR WINNERS FOR BEST OF THE WEST 2022:

Tweet
Published in Best Bets
More in this category: « 7th Annual Best of the West: Dining What's Going On This Month: August 2022 »
Login to post comments
back to top