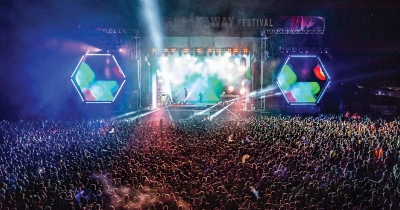 Events, happenings and goings-on in Grand Rapids and West Michigan for August 2022.

Hosted by the Hispanic Center of West Michigan, the Grand Rapids Hispanic Festival is a celebration of the cultures and diversity of Hispanic heritages. The free three-day festival will feature authentic dance, music and clothing, not to mention vendors of food, art and more.

You’ll be able to hear the bass bumping from the Intersection down the streets outside. Three stages will host 13 musical acts from all over the country, and some beyond, for a night of dubstep, EDM and all things bass. Headlined by Boogie T, this event is sure to get heads banging.

A Glimpse of Africa Festival

This showcase of the rich and diverse African cultures will include authentic food, local designers displaying each country’s traditional fashion, art vendors and interactive activities. Local African talent including DJs, dancers and singers will be performing all day long at this third reprisal of A Glimpse of Africa Festival.

Tequila connoisseurs will thrive at this tasting convention which features hundreds of agave-derived spirits to be sampled alone or in cocktails, accompanied by taco trucks. General tickets include a tasting glass, 10 sampling tickets and a keepsake, and designated drivers can come along for the food at a steeply discounted price.

Come rock out — quietly — at the return of the Silent Disco outside in the historic Sullivan Field. Special guest local DJ “dhat part” will debut his new EP during a 45-minute headphone-less set in the middle of the evening. The event is kid-friendly, with yard games for kids and adults, and free admission for those under 12.

Marking the 20th anniversary of one of the most perennially beloved bands, Maroon 5 is hitting Grand Rapids on their world tour. Everyone can sing along to songs from their first album to their most recent, and this concert is sure to get the crowd belting along with Adam Levine.

Headlined by The Chainsmokers, Yung Gravy and DJ Snake, Breakaway Music Festival is bringing a weekend of pop, rap, and everything in between to Grand Rapids. Adding to the experience is a silent disco sponsored by White Claw, not to mention food trucks, vendors and activities.

CluedUpp Games, an international geo-gaming experience, is transforming the streets of downtown Grand Rapids into a unique outdoor escape-room style challenge. Using their app, you trek through the city, led to the next location by solving puzzles and challenges, but if you get tired, you can just pause the adventure and pop into any of the surrounding restaurants, coffee and businesses.

Reprising his similarly named tour of four years prior, “Weird Al” Yankovic is bringing a unique show to the stage. Pulling from his 14 studio albums, no two shows on this tour will ever be the same. Joined by comedian Emo Philips, this is bound to be an evening of laughs.

Who doesn’t love an 80s dance party? Complete with 80s fashion, music videos and all the tunes that defined the decade, this themed dance night promises to be a blast. Special guest The Crimps will play covers of everyone’s favorite 80s jams, only adding to the experience.

Touring the world on her new album, Blue Water Road, pop artist Kehlani is coming back to Grand Rapids with guest performer Rico Nasty. It’s been five years since the young pop star last toured, promising a high-energy night full of the new album and some familiar hits.

Mr. 305 is making his way to the 616! Following the success of his 2021 tour, Pitbull is performing across the country yet again, with his Can’t Stop Us Now tour bringing every crowd to their feet, dancing and singing along to familiar favorites along with new singles.

Tweet
Published in Best Bets
More in this category: « The 7th Annual Best of the West Winners Kayaks, Tubes & Canoes, Oh My! »
Login to post comments
back to top