What's Going On This Month: November 2022 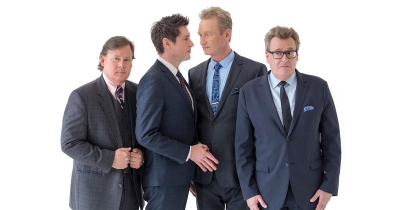 Events, happenings and goings-on for the month of November, all over West Michigan!

Join #1 Billboard Blues Artist Joanne Shaw Taylor and her amazing band as they perform her highly acclaimed new release, “The Blues Album” from start to finish, along with fan favorites. Taylor is a British blues rock singer and guitarist who was discovered by Dave Stewart of the Eurythmics at the age of 16. She has become one of the hottest live acts on the modern Blues scene, and soon you’ll see why.

An Emmy and Grammy nominated comedian, Bill Burr is one of the top comedic voices of his generation achieving success in TV and film as well as on stage. You may know him from his many standup specials or from shows like Breaking Bad. Bill’s Monday Morning Podcast is one of the most downloaded comedy podcasts and his arena and amphitheater tour, Bill Burr (Slight Return), will tour North America throughout 2022.

Dance all night to the best songs ever and make it a night to remember with Fangirl Fantasy. It’s a night where you can be yourself unapologetically, through dancing, singing, photo booths and much more. This night pits two of the fiercest fandoms against each other — except for the fact they actually have a ton of overlap. Calling all Haylor stans!

Come celebrate The Mitten’s 10th Anniversary with a big party both indoors and out! Of course, you can expect the can release of Imperial Peanuts and Crackerjack, the signature robust porter from the brewery. Enjoy live music from local bands. Play with a tee ball inflatable from the West Michigan Whitecaps. Head outside for a s’mores cookout in “The Outfield,” their back lot. Plus, of course, pizza!

Get excited to come back to the Fulton Street Market for a second annual holiday market from Merchants and Makers. Over 100 of the best makers around will line the covered market space with their high-quality products, perfect to get a start on your holiday shopping! Smoke n Ash, Patty Matters, Voyage Bowls, and Stud Muffins Cupcakes will be there with their amazing food. Rae and Mae will be singing. It’s only $3 to get in and kids are free. If you can’t make it to this one, hit up Holland Holiday Shoppe on the 19th and 20th!

The Grand Rapids Comic-Con is back once again, and this time it’s a big one, hosted in DeVos Place. Time to get out of our doomsday bunker and see some other people with similar interests! Come for three days of cosplay, films, gaming, comics, art and presentations with special guests. Those guests include actors in nerdy media, voice actors, YouTube stars, comic writers, artists and more.

Trevor Wallace:
Are You That Guy? Tour

Trevor Wallace is a 29-year-old stand-up comedian, writer and actor known for his many skits online, from “How moms went through your room in high school” to “F*ckbois at the doctor”. Wallace can be seen just about everywhere on the internet and has collectively built a digital thumbprint of over 2.5 billion views across his social media channels with a following of over 16 million fans collectively.

Join at Blandford Nature Center for the annual fall Nature Makers Market! This market features gifts and goods inspired by nature and created with natural materials. Vendors will be selling a variety of handcrafted goods including jewelry, textiles, art prints and illustrations, stickers, and more. This is the perfect opportunity to shop for the holidays (or for yourself) while supporting local artists and Blandford Nature Center.

Prepare to laugh until you cry when four of the world’s most masterful improv artists take you on the high wire act of comedic acrobatics. Featuring Ryan Stiles and Greg Proops, both seen on ABC’s “Whose Line Is It Anyway?” as well as Jeff B. Davis and Joel Murray, their rapid-fire wit and non-stop jokes will have your sides splitting and begging for mercy, and also begging for more. If you are a “Whose Line?” fan, get ready for the same relentless laughter that you grew to love, but without the commercial breaks!

Whether you’re a connoisseur or looking to learn, bring your curiosity and join as Margaux continues to celebrate the world of whiskey and complimentary spirits! Happy Hour begins at the Lounge at Margaux at 5 p.m. The private mixology class featuring Greta Harper from Maker’s Mark kicks off by 7 p.m. Join for a lively, educational class, using varieties of whiskeys and spirits while enjoying the company of other whiskey-loving ladies (and gentlemen).

Now in its 15th year, this Festival has established itself as Michigan’s annual tasting event, measured by more than 1,200 wines, beers, ciders and spirits from around the world, along with creations from the area’s finest restaurants. From the connoisseur who lives and breathes for the finer things in life to the novice looking for an introduction to the world of food and spirits, this Festival will deliver a grand experience that is sure to please every palate.

Candlelight concerts bring the magic of a live, multi-sensory musical experience to awe-inspiring locations like never seen before in Grand Rapids. The historic, beautiful Fountain Street Church is the perfect place for it! Come through for a 65-minute performance with pieces like The Four Seasons from Vivaldi and Libertango from Astor Piazzolla, all lit by gorgeous candelight.

Straight No Chaser is a male a cappella group that is neither strait-laced nor straight-faced. They have emerged as a phenomenon with a massive fanbase and a long list of accomplishments, not to mention a large catalogue of music that heavily features holiday favorites. Straight No Chaser is the real deal, the captivating sound of nine unadulterated human voices coming together to make extraordinary music that is moving people in a fundamental sense, and with a sense of humor.

Tweet
Published in Best Bets
More in this category: « Cheers to 15 Years of Great Taste: International Wine, Beer and Food Festival All In: Casinos in West Michigan »
Login to post comments
back to top