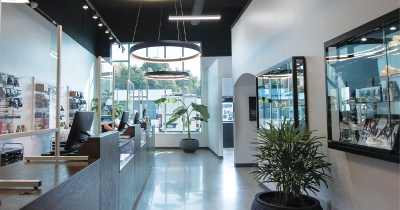 Even now, in 2020, cannabis is still fighting an uphill battle.

Sure enough, it’s winning that battle — as evidenced by voters legalizing recreational use — but there are decades of stigma to overcome. Simply look at Grand Rapids, slowly entering the pool one toe at a time.

Myths abound when it comes to cannabis, driven by the same fearmongering that led to Satanic Panic, McCarthyism and broken windows policing. That vilification began in earnest in the ’70s, when Richard Nixon launched the Shafer Commission to investigate the harm of “marihuana.” To his surprise, the commission found that it was only as dangerous as alcohol and should be decriminalized. Nixon ignored the report, instead classifying cannabis as a Schedule I drug, the most restrictive category.

The goal was to have an easy way to control the groups of people he saw as a threat: hippies and minorities, especially Black people. This move caused irreparable harm, a topic we’ll cover further in a future column.

For now, let’s take a look at these myths and see what water they hold, with the help of a few industry insiders: EJ Ostrander and Tracy Powers from Agri-Med as well as Roberta King of Canna Communication.

Myth: Cannabis is a gateway drug.

Everyone’s heard this one. Supposedly, once you start using cannabis, you get bored with it and seek higher thrills. Of course, this myth is based only in the fact that people who use “harder” drugs are also likely to smoke weed. “The National Institute for Drug Abuse says people who are vulnerable to drug taking are simply more likely to start with whatever’s available, whether it’s marijuana, alcohol or anything else,” King said.

In other words, these people were going to seek out harder drugs regardless. Also, when people are buying marijuana on the black market, their dealers are likely to have other drugs to sell that they might urge you to try. Of course, that doesn’t happen with provisioning centers (aka dispensaries). The weed itself isn’t leading to harder drugs — the criminalization is.

All you have to do is look at how cities in West Michigan are already handling dispensaries to know that’s not true. As King and Powers pointed out, Grand Rapids and Muskegon are hardly zoning into suburban neighborhoods. Provisioning centers are going in industrial parks and dilapidated buildings. “They put them in neighborhoods where they’re going to improve the situation and make things better. The properties in most communities have done more to improve a property than to create a crime-ridden situation.”

Plus, unlike liquor stores, provisioning centers aren’t even allowed to display or advertise their products in windows.

Luckily, Powers said that communities are starting to come around as cannabis becomes more commonplace, and people “see not only the benefits to their constituents from having the medicine available, but also the financial benefits for the township.”

This is a valid concern, as we do know cannabis is bad for developing minds. However, when we look at states like Colorado and Washington, King says we see an ebb and flow. Teen usage might increase a bit and then dip down again, but there’s no huge spike you might expect. King notes it’s comparable to the impact West Michigan’s beer culture has had on teen drinking. “Did we see more teenagers drinking craft beer and distilled spirits when we became Beer City? Did kids just go out of their minds? Like, ‘I’m gonna get some of that craft beer, that high-alcohol stuff, drink it up.’”

Myth: You can overdose on weed.

This is flat-out untrue. No one’s ever died from smoking too much. “Usually, the worst side effects of taking too much marijuana are dizziness and anxiety. I would say that is the worst you’re going to get,” Ostrander said.

Regardless, you should start low and go slow. Talk to budtenders and ease your way into cannabis and you can avoid any noticeable side effects at all!

Myth: THC is all about getting high.

Ostrander said he encounters customers who only want CBD because they’re worried THC will get them too high, with no health benefits. However, he believes THC has its own uses — including muscle soreness, sleep aid, anxiety and more — so they should be used together. Again, low and slow is the key here.

On the flip side, he also deals with people who think higher THC content equates to better products. But different strains have different cannabinoids and terpenes that “play a big role in the effects and flavors. Numbers aren’t everything. What we really want to look for is a full-spectrum product that is based toward your ailment or where you need relief.”

Myth: We know cannabis is 100% safe with no downsides.

Due to cannabis being federally illegal, any research on the drug was put on hold for decades. While we don’t have any reason to believe cannabis has dangerous long-term effects like cigarettes, it’s still a drug and we have plenty to learn.

For instance, smoking anything isn’t the healthiest way to consume it, but studies have not shown a link between smoking cannabis and lung cancer. As with alcohol or any drug, including pharmaceuticals, it’s good to acknowledge that we don’t yet know what we don’t know.

As King says, “Crash on the couch, not in your car.”

Tweet
Published in Cannabis
More in this category: « Potshots: November 2020 Potshots: December 2020 »
Login to post comments
back to top