Lighting the Way to Cannabis At Events 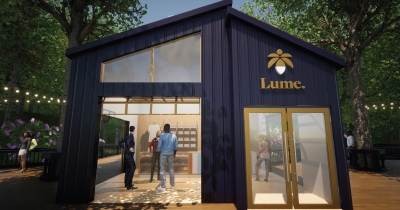 For decades, alcohol has been considered the norm at concerts, theaters, even movies! But what about cannabis?

Sure, you’ve seen smoke rising over the crowd as a few people near the pit pass a joint around, but that’s hardly sanctioned by the venue. Now, cannabis is legal though, and anyone over 21 can easily walk into a provisioning center and buy as much as their wallets allow (or at least, up to 2.5 ounces).

For an industry selling a product that’s still considered federally illegal, moving into the event space isn’t easy. But Lume Cannabis Co. has got the ball rolling with a first-of-its-kind partnership with DTE Energy Music Theatre. While this gorgeous amphitheater is located on the east side of the state in Clarkston, the partnership will have reverberating effects across the state, and potentially the world.

The immediate result of this partnership is Lume’s new Tree House lounge in the theater’s Pine Tap open-air beer garden, which features craft brews from Founders and food from Union Mac Shack.

This lounge area is starting off primarily as a space to get educated, buy cool merch, and just hang out! Director of Marketing Zach Schreier said the goal is to teach people about how to find the right cannabis for them, and eventually offer an opportunity to purchase products to be delivered the next day. There will also be pipes, ashtrays and other accessories exclusively available at the lounge, along with local art pieces for sale!

Lume’s presence at a prestigious venue like the DTE amphitheater should help legitimize not only the brand, but the entire industry. It’s another step toward people viewing cannabis as just another part of daily life. Plus, this is reaching out to people who are active and enjoy community events, rather than the stereotypical couch stoner.

It hasn’t been the easiest effort in the world, but Schreier said it’s a fun challenge. “There were a lot of conversations we had to have, starting with their sales group all the way up to the board of directors, because it was not a category they were comfortable doing business with originally.”

It’s not too surprising that the theater’s owners, 313 Presents, would be skeptical, especially since they also own Little Caesars Arena, Comerica Park and other big venues. However, that sports connection is actually what allowed the partnership to happen, since Lume’s founders previously worked at New Balance Warrior. Plus, music is the perfect place to start when it comes to cannabis.

With any luck, the Tree House will one day be able to sell cannabis products on-site, but there’s little to no precedence for such a thing happening legally in the modern era. Schreier expects Lume would focus on lower THC, more discrete products like edibles and beverages. “I don’t know a scenario where we’ll be selling super high concentrates. It’s just not the place for it. You can buy liquor at a football game, but you can’t buy grain alcohol.”

Schreier also points out that Lume’s lounge would be closed for more family-centered events. You don’t have to worry about bringing your child to a Kidz Bop concert and watching them get zooted off of secondhand smoke.

In Grand Rapids, Tami VandenBerg is both a cannabis advocate and owner of the popular music venue The Pyramid Scheme. She’s excited for the idea of event licenses, which could allow for cannabis consumption at outdoor events.

“Muskegon has opted into these, along with many other communities throughout Michigan. Grand Rapids does not currently allow these, but I’m hopeful that will change in the near future,” VandenBerg said. “Regarding consumption at indoor events, certainly folks already consume edibles prior to shows, but smoking is not allowed by the government at public events. Private events may be an option, depending on the business and municipality.

“I think some communities will allow live music in ‘cannabis consumption lounges,’ and indoor entertainment venues will likely have the option to allow smoking cannabis at some point in the future. As the smoke and smell is bothersome to some music listeners, it will be interesting to see which events would do better allowing cannabis smoking. I predict there will be some events that see a much higher attendance if smoking of cannabis is allowed.”

Only time will tell what direction we’re headed in regards to onsite consumption, but in the interim, Lume has taken a huge step forward with this partnership. For now, they’ll keep doing their part to legitimize cannabis’ place in society, and keep following the company’s goal of helping every single consumer feel comfortable with cannabis.

Keep an eye out for events like Yoga On the Lawn, an event partnership with Citizen Yoga that included live sounds and music, free swag bags and a CBD coffee and tea bar. And while you’re at it, consider checking out one of Lume’s 20 provisioning centers around the state, or even ordering delivery.

“We’re very encouraged with what we’re seeing from the industry in Michigan, what the consumer has said about us, both vocally and through their purchasing power. But obviously, that’s not something where we want to rest on our laurels; we’re just continuing to get better and keep expanding.”

Tweet
Published in Cannabis
More in this category: « Grow Your Own Grass Talking Shops »
Login to post comments
back to top