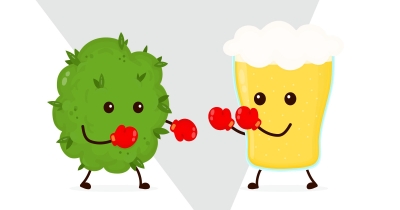 The relationship between cannabis and alcohol is often portrayed as a sort of battle.

When people criticize cannabis, for any number of myths and misunderstandings, a common retort is that alcohol is “worse,” saying it’s “poison” and that “no one ever starts a fight when they’re high.” Then drinkers come to the defense, explaining how alcohol acts as a social lubricant while smoking weed turns them into a vegetable, silently staring into space.

Obviously, I think the two can live in harmony, but for the sake of seeing the full picture, it’s worth discussing the pros and cons of both cannabis and alcohol. So, let’s take a look at how they stack up against each other in different areas, while also acknowledging that whatever you consume is valid, as long as it’s in moderation.

Socializing  |  For those of us who both smoke and drink, there’s always a choice to be made before a social gathering. Personally, I can’t imagine showing up to a party high, with my reaction speed slow and my brain unable to form sentences. The buzz of alcohol wipes away anxiety and brings down walls, leading to unforgettable (depending how much you drink) experiences. Cannabis, meanwhile, is better for sitting on the floor with a small group of friends, listening to vinyl records.

Sleep
Both alcohol and cannabis can help you sleep, but both also can disrupt the sleep cycle. That said, the science seems to indicate that cannabis can have a number of sleep benefits when used in moderation, while alcohol simply has none. Cannabis wins here!

Options
There’s a huge variety of alcohol out there, but it all has one thing in common: Liquid. Meanwhile, cannabis has flower, vape pens, gummies, chocolates, patches, balms and so much more, including beverages. Not only does that mean more options, it means convenience. It’s much easier to pop an edible before a concert than sneak a pint in—not that we’d ever endorse that sort of behavior!

Driving
I’m not even going to compare the two, because both are bad for driving. Don’t drive drunk, and don’t drive high.

Weight
I’m fervently against body shaming and/or diet culture, but I also can’t deny nutrition is a big part of our lives. The big difference here is that alcohol inherently has calories (as anyone who’s worked at a brewery can certainly attest to), while cannabis has none. Of course, the munchies are real, and it takes more self control than I have to not cave to their demands. My advice? Eat healthy and exercise during the day so that you don’t even have to resist the munchies at night.

Long-Term Health
This is where the battle really gets furious. I’m not a medical professional, and with cannabis still federally illegal, we’re lacking in really solid health studies. Still, we know for a fact that alcohol is very dangerous in excess, whether it’s short-term alcohol poisoning or long-term liver damage, or even the death of brain cells. On the other hand, drinking in moderation really isn’t an issue at all. Cannabis, meanwhile, is impossible to overdose on and it doesn’t seem to have developmental side effects except for when used by minors. But smoking anything daily can have long-term impact on your lungs, which is why some users find other ways to consume. Again, the key is moderation.

Hangovers
We all know that drinking too much can ruin your next day, which very rarely happens with cannabis. It is possible to smoke so heavily or take such a potent edible that you feel drowsy, brain fog or even headaches the next day, but it’s rare.

Stigma
Cannabis faces stigma from years of racist propaganda and the government’s war on drugs, and we’re just now starting to overcome the image of stoners and shady drug dealers. Alcohol, on the other hand, faces stigmas earned over millennia—it can result in alcoholism, it can make people act unlike themselves, and it can lead to poor choices. I understand why so many people are switching to the sober lifestyle.

However, we’re dealing with a new kind of stigma lately: The judgy smoker. Be warned that if you ditch alcohol and start bragging about being sober and telling everyone you know how bad alcohol is, it’s not a good look—especially if you call yourself “sober” while smoking plenty of cannabis. Whichever side you’re fighting for in the war of cannabis vs. alcohol, please remember to do so with love and respect.