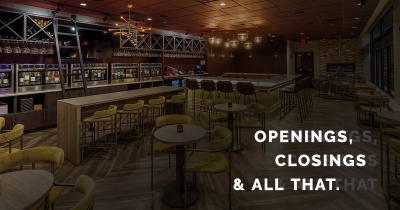 Editor’s Note: Many of these shops were forced to open at the worst time imaginable, during a global pandemic when they weren’t even allowed to have people inside. So however you can, please support these small, local businesses.

South East Market opened at 1220 Kalamazoo Ave. SE in Grand Rapids, with the goal of fighting injustice through food and consumer activism. The market offers local, sustainably grown and raised food at an affordable price, while working in the community to distribute resources and make Grand Rapids a more equitable place, especially for the Black community.

The Pack Indoor Dog Park finally arrived in Comstock Park, kicking off this year with an opening at 5205 West River Dr. NE. This is Michigan’s first indoor dog park, and more than that, they have food and drink offerings. If your pup needs some safe socialization and you do too, head to The Pack for a day of play, pizza and beer on tap. There’s no other dog park like this, especially in the winter.

MDRD (pronounced Madrid) arrived at the top of Amway Grand Plaza, at 187 Monroe Ave. NW, Grand Rapids. This new restaurant is “lavishly Spanish,” featuring gourmet dishes like Paella Mixta alongside an array of tapas, impressive desserts and craft cocktails. Enjoy all this while taking in panaromic views of the city from 27 floors up.

Kaffeine is a unique café and eatery now open on the Medical Mile at 637 Michigan St. NE, Grand Rapids. The shop has tons of specialty coffee drinks, from pourovers to turmeric ginger chai lattes, as well as Korean-fusion food, such as bulgogi burritos and rice bowls.

Dokl’s Grill & Catering joined the meat market of the same name at 4615 West River Dr., Comstock Park. Head in for a burger or specialty sandwich, such as the Zac-Zac, with grilled pork cutlet, grilled pineapple, provolone cheese and bistro sauce, all on a brioche bun. While you’re there, you might as well take a nice, big steak home too.