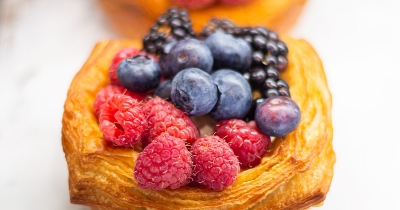 Dank Street opened its official space at 1808 Monroe Ave. NW, Grand Rapids, sharing a kitchen with KJ Catering. This new eatery is “farm-to-street” food, all 100% vegan and gluten-free. The menu includes tacos, appetizers and more, using local ingredients. As Dank Street says, “We pride ourselves on a rotating weekly menu that’s inspired by seasonal harvests. Street Food to us means real food. What the locals eat. Food that makes you lick your fingers. No reservations or limitations.”

With a successful run at its first location on Lyon Street, Nantucket Baking Co. brought a second location to Grand Rapids at 1308 Fuller Ave. NE. The menu is essentially the same at both locations, including lots of bread, pastries, scones, dessert bars and far more. Stop in for breakfast, lunch or a gorgeous little treat.

Gaby’s Gourmandise joined the Downtown Market at 435 Ionia Ave. SW, Grand Rapids. This French-style patisserie is run by a French chef, Jean-Gabriel Ferrandon. His offerings include both sweet and savory goods, from Quiche Lorraine to Palet Breton. The names sound fancy and the techniques are high-level, but the food itself is approachable and enticing. Galettes, tartes, eclairs, sandwiches, cookies — it's all here.

Right next to The Cheese Lady, Pux Cider opened its taproom at 311 Fuller Ave. NE, Grand Rapids. Pux has been making and distributing delicious cider for years, but the tasting room gives a place to gather. The ciders cover a wide range of flavors, including the Pomander, an orange-liqueur soaked bourbon barrel cider with clove. Or try the Minty, with Earl Grey tea and mint leaf. These ciders aren’t sugar bombs — they put the fruit in the spotlight.

Rinaldi’s Pizza and Sub Shop closed its longstanding location at Fulton and Diamond. However, the shop is still going at its second location at 1539 Plainfield Ave. NE, Grand Rapids! The menu is the same, and they’re next door to Quinn and Tuites Irish Pub if you fancy a pint. Stop in for a slice, a full pizza or a variety of subs.

After 28 years as a staple eatery in Grand Rapids, Osta’s Lebanese Cuisine was forced to shut down due to COVID-19 difficulties. A statement from owner John Aouad said, “We gave it our best shot by taking from our household budget to stay afloat, but we cannot hang on any longer. Words cannot express our gratitude to God, our family, friends, and customers (who we count among our friends), for your patronage and support. We wish all of you well, and hope to stay in touch, and see you in the future.”

Tweet
Published in News
More in this category: « Best of the West 2021 Is Here! Biz Beat: August 2021 »
Login to post comments
back to top