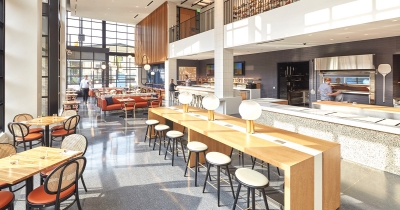 Portico joined the downtown dining scene at 131 Ionia Ave. SW, Grand Rapids — also known as the Canopy by Hilton. This restaurant utilizes the talents of local chef Trimell Hawkins to create an impressive blend of American and French cuisine, such as Cornish Hen & Cornbread, with velouté, bacon lardons, a savory cornbread dressing, and topped with an arugula and grannysmith apple salad. It’s a modern experience right downtown, following in the footsteps of sister restaurant Knoop Rooftop Beer Garden.

Wyoming has a new taproom in the form of 3 Gatos Brewery at 1760 44th St. SW, taking over the space formerly held by Kitzingen Brewery. The married owners knew the owner of Kitzingen and he personally suggested they take over. They’ve been on an amazing path through life, bringing Brazil heritage (mainly in the food) and a taste of Germany (mainly in the beer) to West Michigan.

Archival Brewing also joined the ranks of Beer City, setting up shop on a former golf course at 6266 W. River Dr. NE, Belmont. The taproom is well within reach of Rockford, Grand Rapids and Comstock Park, but more importantly, they focus on resurrecting ancient beer styles and utilizing lesser-drank styles from around the world. Archival also has a strong selection of house-made mead and cider, not to mention from-scratch food.

The Fresh Market at United Methodist Community House is bringing more healthy food options to a community with very little access close-to-home. The storefront at 900 S. Division Ave., Grand Rapids sells fresh, locally grown produce and other healthy foods, using a discrete and private sliding scale to ensure it’s affordable for everyone. Fresh Market is totally open to the public, and by shopping there, you can help their mission while getting local, “real” food.

Do you want quessabirria? It’s a cross between a taco and a quesadilla, featuring birria-style cooked beef with melted cheese and a side of consommé for dipping. So, yes, you do want it. Head to Los Mariscos De Pancho at 1358 Leonard St. NW, Grand Rapids for this delectable dinner. They also offer ramen birria, shrimp boils, and more.