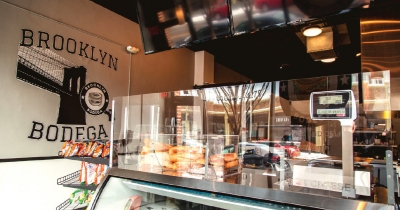 Brooklyn Bodega arrived downtown Grand Rapids at 10 Jefferson Ave., in the space that once held Cult Pizza. They offer “a taste of Brooklyn” with features like egg and cheese bagels, deli sandwiches and build-your-own salads, the perfect lunch spot for anyone near downtown.

Social Misfits opened on the ground floor of the new Residence Inn by Marriott, at 43 W. Fulton St., Grand Rapids. This eatery welcomes all — the weirder, the better. The menu focuses on the kinds of waffles you’ve never had before, like the Yasuke, with ramen, soft-cooked egg, scallion, furikake and gojuchang aioli. They also have sweet options, “normal” food, and top-notch coffee/cocktail drinks.

The people behind Principle brought a new concept to Kalamazoo: ROCA, at 247 S. Kalamazoo Mall. “Based on the foundational elements of locally sourced ingredients, classic scratch cooking, a unique dining environment and exemplary service, ROCA presents an exciting and unforgettable fusion of flavors inspired by Latin American culture and cuisine.”

The long-awaited Ambiance GR Kitchen & Lounge has arrived at 106 Pearl St. NW, Grand Rapids. If you’ve been missing an upscale place to meet cool people while partying, dancing and drinking, Ambiance is for you. The kitchen isn’t open yet, but the lounge certainly is.

Shift Coffee + Culture is bringing specialty coffee and a variety of waffle creations to the west side after opening at 616 W. Fulton St., Grand Rapids. Stop into this minority-owned business for an alternative vibe and treats like a S’mores Latte and The Shannon, a waffle with apples, granola, cinnamon and icing.

K-ROK Korean BBQ & Karaoke is now open in every way, offering a full menu, self-cooked Korean BBQ, and private karaoke rooms. The restaurant from the owners of Emonae opened at 169 Louis Campau Promenade in downtown Grand Rapids, across from Z’s. Call ahead to reserve a private room and eat, drink and sing the nighta way.

In other Radisson news, Curry Kitchen GR moved away from 28th Street, now located in a clean and modern space (with alcohol!) in Radisson Hotel Grand Rapids Riverfront. Order their delicious Indian food for delivery or stop in to the new space at 270 Ann St. NW, immediately off the highway exit.

The Mitten Brewing Company expanded its footprint with the Mitten Pizza Co. in Rockford, now open at 6051 Belding Rd. NE. Stop in for long-established fan favorites like the Westerdog, a chili-cheese dog pizza, or Curse of the Goat, with house sausage, goat cheese, peppadew peppers and basil. Plus, keep an eye out for a future collaboration with Amore!

The owners of beloved GR home/gift shops Rebel and Commune have a new venture: Sticky Fingers. Now open at 1503 Lake Dr. SE, Grand Rapids, the shop brings together the colorful, yet old-timey feel of a classic soda shop with modern candy, toys, stickers and other treats. It’s the kind of store people of all ages can find something to love.

Since 2007, Brick Road Pizza (1017 Wealth St. SE, Grand Rapids) has been serving incredible food to Grand Rapids, pioneering vegan and vegetarian menus with pizza, pasta and much more. However, they recently closed doors permanently due to the unbearable stress of the pandemic and a total lack of staff. We wish them and all other local business owners the best of luck in the future!

Italian restaurant Osteria Rossa (16 Monroe Center St., Grand Rapids) closed doors as well, saying “Due to these unforeseen times, we have had to make the decision to close our doors. We appreciate your continued love and support and hope to see you all at future endeavors.” Those interested in seeing what’s next should follow chef/owner Chris Perkey at @chefperkey on Instagram.

Ramona’s Table in Rockford (17 Squires St. Square NE) closed at the end of last year due to the owners retiring. However, the space is being filled by a second location for The Toasted Pickle, a specialty sandwich shop in Grand Haven that’s known not just for excellent food but fresh-squeezed lemonade.

Eastown Antiques (1515 Lake Dr. SE, Grand Rapids) shuttered doors after 18 years of business. The building was sold, raising rent and leaving the owner in a state of confusion as to what to do next, and thus the neighborhood antique shop sadly shut down permanently.

Adobe In & Out’s Leonard location officially closed permanently due primarily to staffing issues, but the other locations at Fulton Street and Chicago Drive remain open.

Tweet
Published in News
More in this category: « Biz Beat January 2022
Login to post comments
back to top