In 2012, SCOPE NYC named you one of the world's top 100 artists. How did you feel when you found out about the honor?

I was ecstatic when I got the news, because it was an international call for entry. I felt very honored to be featured ... It was a great feeling.

How did it affect your career?

It basically continued on as normal ... but all the exposure has been great.

You're originally from Michigan. Which area?

I was born in Detroit and I've been residing in the metro Detroit area ever since.

Clearly, the experience growing up in the Midwest has affected you artistically.

As a child, memories of going out to the farms in the autumns and summers, they come back to me now as I paint. Just the landscape of Michigan has been a constant source of inspiration ... No matter where I'm at, it's always home for me. The fields, the expanse, the wide-open skies. All of those elements that are so Michigan and where we're from – it's just who I am and where I come from. It just finds its way into my work constantly and it's a jumping point as far as using a backdrop and creating this world that I create with my own emotions and stories that are interwoven.

You're based in Sterling Heights, but your gallery (Richard J. Demato Gallery) is in New York. I assume you do a lot of traveling.

I do [travel] quite a bit for shows and business and work and everything. I was recently over there for the ArtHamptons International Fine Arts Fair to promote my work, and that was a really great experience.

Last year, you made ArtPrize's top 25. How was your overall experience?

ArtPrize was an excellent experience. I actually entered the first year, in 2009, and then I got involved with my gallery and had been working full time with that. I was talking with my gallery and they suggested I enter my painting ("Sojourn") in ArtPrize. I really didn't have that much expectation going into it. I did try, in the sense of getting involved in a great venue, which was the GRAM, and I felt very fortunate to be included in their exhibition. And I just sort of let it go to see how the people would respond.

Did you expect to win?

Victory is always a great thing ... but at the end of the day, I felt so honored to be featured in the 25 and now the painting is featured permanently in the GRAM's collection. And that's the hugest victory for me.

How did "Sojourn" gain a permanent position in the GRAM?

I guess what they told me was they were seeing how people connected so much with the work and the response was so great toward it. They spoke with my gallery and I ... and everything
worked out and they purchased it, and there it is. To this day, it's surreal and wonderful to imagine it's there because it's my first placement in a museum and what better place to start here at home in Michigan.

Currently, you're showing at Muskegon Museum of Art. How did that get set up and what's that been like so far?

That sort of happened along the journey right before ArtPrize. I don't really know the details of how it all came about, but [a collector] spoke with the Muskegon Museum and they looked at my work and contacted my gallery and we started talking and having meetings and everything snowballed from there.

You also released a book to accompany the exhibition at MMA.

In itself was an amazing, amazing experience to be present one-on-one with the museum and the designer. I actually went to press checks to see the book being made. It's wonderful. I'm very happy with the way things turned out. 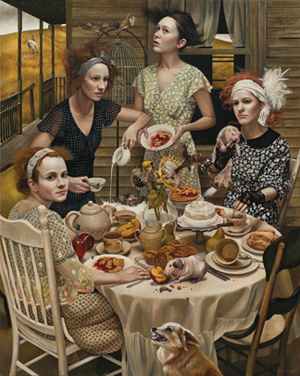 You've been compared to director Alfred Hitchcock and realist painter Andrew Wyeth. Do you agree with that?

Sometimes it's nice to hear what people are gathering from the work, and you keep it in the back of your mind as kind of a guide of what genre you're fitting into. But it's not really a matter of that for me. But of course, all of those comparisons are a great honor for me. I love Hitchcock, I love Wyeth. All of those things that have that mysterious aspect to them are parts of me and the work that I do.

What are you working on now?

I'm working on a series of portraits of my characters.

Your characters show up throughout your paintings. Do you create personalities and backstories for them?

I would say I do in many ways. I work with actual models who are my friends. These characters just kind of came into being on their own as I painted. All of them in one way or another are different parts of me, acting out different feelings.

Is there one particular piece of yours that you hold close to you?

All of them have certain things about them that I love. I would say to this day, one of my earliest paintings – "No Turning Back," it's a girl with flames – that painting for me, as an early work, was a very personal piece and it actually was a piece that created this whole journey that I'm on. My gallerist, Richard Demato, who is the driving force behind my career, found me by seeing that piece and I feel led to everything that's happening now [through that piece].

It sounds like you appreciate how it set everything in motion.

Catch Kowch's exhibit "Dream Fields" at the Muskegon Museum of Art through October 27. For more info about the artist, visit andreakowch.com.

More in this category: The Beer Issue 2013 »
Login to post comments
back to top