Laughing With: The Comedy Project 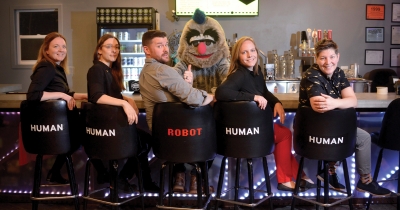 Comedy is so much more than just stand-up. Improv, sketch shows and theater provide a near infinite wealth of laughs, and do so with collaboration and community.

Grand Rapids has had improv groups and classes for some time, yet there was never a dedicated space just for groups of comedians to come together and put on consistent improv and sketch shows throughout the week. That is, until The Comedy Project was born.

This time last year, the project and building sprung up on Leonard Street, just in time to squeeze in some LaughFest events. But being put together by a small, resourceful team, it took about a year to really build the space into what it is now: A very special comedy club providing a wide variety of laughs with professional production, community classes and moonshine.

With the help of a 2016 Kickstarter, comedians Joe Anderson and Ben Wilke went on to launch The Comedy Project, which had its official grand opening on Jan. 31. Of course, the official story is that robot overlords conquered the Earth and only allow the club to exist because robots can’t do comedy, so you can decide which tale to believe.

Every week, they have three to six shows that range from an always-changing comedy variety show called Comedy Outlet Mondays to a Whose Line Is It Anyway? style improv show called Battle Bots.

Whatever show you come to, you’ll notice right away that this isn’t just any random stage. The staff used their years of experience to create a very special space.

“One of our biggest things was being able to bring some theatricality to a comedy show,” Anderson said. “There are cool lights and costumes and the things you’re not used to getting in town. Our goal is to put on a show.”

With a theater degree from Western Michigan University and years of experience touring as an improv comedian, Anderson was able to create an intentional space that works great for performers and audience alike. His improv troupe was used to carrying around a 24-foot-wide light truss and their own sound system, which eventually gets a bit tiresome — The Comedy Project gives him and other comedians a place to get theatrical in a space designed for it.

““It isn’t just a room where comedy happens every other Friday. That’s what we do, all the time, and if you’re at an event here, there’s a reason it’s happening here,” Anderson said.

When you step into this hidden gem essentially tucked behind Two Scotts BBQ, you notice that attention to detail immediately. The lobby is special, with robot art everywhere, a ticket booth taken from a transit station, and a bar stocked with moonshine. Why? Because no one else has it!

The venue itself is comfortable, yet hip, with high ceilings and a wide layout that means no matter where you’re sitting, you’re always close to the stage. It feels intimate, but in no way cramped, with a capacity of about 90 — perfect for comedy.

Since opening, the crowd quickly shifted from friends and family of the cast to newcomers, regulars and out-of-towners, which is a sign they’re doing something right.

“The goal is, we’re putting on shows that are so good and so fun that if someone’s in town, they feel like they gotta go see that show,” Anderson said. “That’s the mindset.”

That success can likely be attributed to bringing something new to town, both in terms of comedy and community. While Anderson has nothing against stand-up, he’s certainly noticed that some people feel much more comfortable at an improv or sketch show.

“I did stand-up for a long time too, and I feel that it can be adversarial by nature between the comedians and the audience,” he said. “The audience has their arms crossed and it’s like, ‘All right, be funny!’ Improv and sketch are communal by nature. There’s an ensemble onstage, so already it’s like, ‘Look at these friends doing something,’ and then you’re in the audience and it’s like, ‘Oh, they need something from me to do their show too?’

“That communal feeling, that every time someone comes here, it’s that same community, has really mattered to us and has been really motivating.”

Building that community isn’t just about putting on a good show, however.

Since launching, The Comedy Project’s Training Center has exploded in size and scope, largely under the direction of Gascon. She estimates around 140 people have completed a course and roughly 70 are enrolled this “term” across three big areas of study: Improv, Comedy Writing and Comedy Performance. They teach all kinds of people across generations, whether you’re a businessperson looking to improve your communication skills, an introvert looking to get out of your comfort zone, or someone who’s dabbled in improv but now really wants to dive in.

Gascon and others at the club work to help people become better, and they love doing it. The Comedy Project even has scholarships to make the programs more accessible, bring more variety to the stage, and improve more lives. “It’s very satisfying to see people discover something new about themselves.”

The classes go beyond learning: Gascon and Anderson are seeing friendships bloom and new comedy troupes come together. They’re both beyond excited to see this happen, especially if the groups bring something new to the table.

“I’m interested in having a bunch of improv teams and sketch comedy, because we’re going to do it the way we know it works for our brand, but that’s not saying we’re the only type of good comedy there is,” Gascon said. “If you have a little more abstract point of view or something that might not fit with us, make your own group and we have some nights where we can showcase some of that as well.

“I want everybody to do whatever speaks to them.”

If you keep your eyes on The Comedy Project, you’ll see the West Michigan comedy scene grow and bloom into something varied and special — even more than it already is. And if you want to be a part of it, you can come see a show and laugh with some of the funniest people around, or even sign up for a class and become a comedian yourself. Either way, it’s rewarding to you and The Comedy Project alike.

“The thing I like about teaching is that I really get to see the very best parts of people,” Gascon said. “I get to see adults discovering new friendships, new things about themselves and new ways of thinking, and that’s a very unique environment, especially as an adult. They’re choosing to be there because they want to have fun and they’re curious.”

Tweet
Published in Cover Stories
More in this category: « Mokaya: Behind the Chocolate Cannabiz in West Michigan »
Login to post comments
back to top