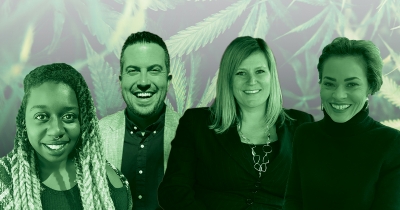 Allison Sevensma admits she’s a typical suburban housewife in East Grand Rapids, and most aspects of her life suggest so.

As Michigan relaxed its cannabis laws in recent years, though, Sevensma has started to branch out. She is the owner of a planned large-scale cannabis growing and processing facility at a vacant building in Muskegon Heights. Though roughly the same population, the Heights is the economic and racial opposite of East Grand Rapids.

“The irony is not lost on me at all.”

As such, Sevensma is entrenched in Michigan’s nascent and at times uncertain cannabis industry, which is seeing fits and starts across several West Michigan communities, including Muskegon Heights. Sixty percent of EGR voters approved recreational cannabis in 2018, but some local officials want to ban businesses there. Sevensma was recently interviewed by WOOD-TV in her home, calling on officials to allow these businesses.

As of early March, Sevensma said Muskegon Heights — which extends like a peninsula from the city of Muskegon’s southern border to the north and east of Seaway Drive — had approved medical cannabis businesses, but it wasn’t yet clear when or how the city would allow recreational licenses. The uncertainty was making her uneasy.

Sevensma and her investors have secured property on Park Street, a roughly 10,500-square-foot vacant building just south of Sherman Boulevard, to grow up to 1,500 plants and process them onsite; it’s not a retail dispensary, to be clear. They have a license to operate a medical facility but are waiting for the city to start processing recreational licenses. Without that, the multimillion-dollar investment isn’t worth it.

“Where we’re seeing difficulty now is the real lag in opting in for adult (recreational) use,” Sevensma said. “Municipalities that have opted in for medical are working their way toward opting in for adult use, but it’s just been a very slow process.”

At this point, Sevensma’s story illustrates the uncertainty cannabis companies and advocates face across West Michigan as communities handle a regulated industry that, for the past century, has operated in the dark and outside the law.

In some areas, the ball is already rolling. Medical cannabis businesses are operating across the region, including in Grand Rapids, Crockery Township, Newaygo, and Kalamazoo as well as Muskegon and Battle Creek, which also have recreational retail stores. More recreational stores are planned in the next month in Muskegon Township and Lowell.

Cannabis reformers say even more cities and towns are on the cusp, naming Walker, Wyoming, and Grand Haven.

But property prices are escalating in some of the limited areas where businesses are allowed, and product prices are skyrocketing because not enough growers have entered the market. A sense of urgency is growing.

“There’s a needless holdup by a lot of these municipalities,” said Sevensma, adding that it should be a “no-brainer” for communities in need of investment and tax revenue. “For some reason, they’re looking at adult use as a totally different beast than medical.”

According to reports, West Michigan recreational dispensaries are open in Muskegon (two), White Cloud, Battle Creek (two), Bangor, Breedsville and Lowell. At least one more expects to open in April, in Muskegon Township. However, far more Michigan communities have opted out of recreational marijuana.

Jamie Cooper, the owner of marketing agency Cannabiz Connection who last year ran for a seat on the Grand Haven City Council, said West Michigan appears to be “taking its time” on recreational cannabis. Cooper is also the publisher of Sensi Magazine, a pro-cannabis lifestyle publication.

“A lot of the communities are sitting back and waiting to see how other communities are going to fare with the new adult-use program,” Cooper said. “However, I think that’s unnecessary. We’re not reinventing the wheel: Adult-use has been implemented in several states before Michigan.”

While Cooper understands local officials’ hesitation, some communities had a majority of voters in favor of recreational marijuana in 2018, such as East Grand Rapids.

“We need to be seeing accessibility in those places,” Cooper said.

“To see a community (like Lowell) have that kind of confidence to do that is pretty impressive,” Cooper said. “But I hate the fact that the medical market was kind of forgotten. There’s a huge need.”

John McLeod is a business owner involved with grow and processing sites and dispensaries across the state. Among his first ventures is Bloomfields, a dispensary expected to open in Muskegon Township on April 20 — to “fully take advantage of stereotypes.” He is also pursuing a large-scale grow facility in Grand Rapids.

McLeod is a former police officer who made a career change into real estate after a serious injury. He agrees with Sevensma that uncertainty from local governments can be challenging.

“From a business perspective, it’s been very nerve-wracking,” he said, adding that Muskegon Township’s approach to handle medical and recreational licensing at the same time was “ideal.”

For some cities, like Grand Rapids, who owns these new businesses remains an ongoing concern. The City Commission nearly put the brakes on new medical licenses and delayed recreational licenses in late February, as some members raised concerns over social equity — that those who have been disproportionately impacted by cannabis prohibition can participate — and local ownership.

The Marijuana Regulatory Agency has also hosted social equity meetings statewide over the past year to help address concerns.

“There are a lot of social equity models in other states that have had a recreational system in place that (communities) could do research on and see how well certain standards are set up,” said Alexandra Bunn, who was recently hired as membership coordinator for the West Michigan Cannabis Guild. “One way is just focusing on the impact it’s had on the community these (businesses) will serve and the negative impact on people who have been prosecuted for cannabis. For them to benefit from the legality of it would be absolutely amazing.”

Communities have taken a variety of approaches to encourage local ownership, such as including residency requirements for owners or by giving preference to companies with local owners.

While Bunn said it felt as though the rollout of cannabis in West Michigan was “slow-going at first, momentum is building very fast, even in the past year.”

Meanwhile, the intentionally slow rollout by the state in approving recreational licenses has also caused high cannabis prices. The state allowed dispensaries to buy product from caregivers and to use up to half of their medical marijuana for recreational sales, but this is being phased out.

Essentially, there aren’t enough adult-use growers yet to meet the massive demand created with legalization. In some cases, recreational marijuana exceeds $50 for one-eighth of an ounce.

Advocates say it could take a year or more for the imbalance to level out.

“The state is making a good effort to try and right the ship, but I don’t see an end to the under-supply market for at least a year, probably more,” Sevensma said. “Too many people like me are waiting for the licensing process.”

McLeod thinks it will take five to seven years until there is “enough actual regulated, tested supply” to meet demand. Also, testing delays only add to supply shortages, he said. “We’ll never be able to reach the demand levels. It won’t necessarily level out for a while, but eventually supply will catch up.”

For consumers and those investing in the market, the ongoing demand is causing urgency for communities to act. With shifting orders from state officials over the past year related to Michigan’s new regulated market, cannabis advocates have had to adapt on the fly. They’re hoping for a smoother road ahead.

“Everyone keeps saying it’s so new, but we legalized it at the end of 2018,” Sevensma said.

“The rollout in Michigan, everyone can agree, is just disastrous.”

Tweet
Published in Cover Stories
More in this category: « Laughing With: The Comedy Project
Login to post comments
back to top