The case — which will likely be appealed to the U.S. Supreme Court — could have immediate implications for the 2020 election with new political boundaries and a special election for some state senators.

The ruling impacts at least 34 state House, Senate and congressional districts around Michigan, including districts in the Grand Rapids, Muskegon, Ludington and Cadillac areas. Fairly drawn districts could bolster Democrats’ chances to pick up legislative seats statewide, as well as in West Michigan.

“When we look at the way those districts were drawn, you can see the intent,” said Michigan Democratic Party Chairperson Lavora Barnes. “We’ve been competing in districts at an unfair disadvantage. Newly drawn districts — if fair — bring us to a point where we can compete and in all likelihood win.”

The three-judge panel ordered lawmakers to draw new maps for Gov. Gretchen Whitmer’s approval by August 1. If the Legislature doesn’t comply, the court could do it itself, presumably in a way that doesn’t screw one political party for the benefit of another.

“It’s important that we draw fair lines,” said state Rep. David LaGrand, D-Grand Rapids. “The voters have spoken on this because we know there’s been a history of gerrymandering districts in the state.”

The U.S. Eastern District Court said Michigan Republicans purposely drew districts to favor their party in a way rarely seen before. The practice is known as gerrymandering, which courts across the country have said threatens representative democracy. It’s done by “packing” one party in certain areas to give them lopsided wins, and “cracking” districts to dilute opponents’ power across more districts. Hence, often oddly shaped political districts.

Across the U.S., both political parties have used gerrymandering to their benefit. The U.S. Supreme Court is considering cases involving North Carolina and Maryland.

During the Michigan case brought by the League of Michigan Voters, emails among GOP operatives and map-drawers made it obvious what they were up to.

LaGrand’s 75th House District is among those the court identified as packed. It splits the city of Grand Rapids with the 76th House District, held by Democratic Rep. Rachel Hood. Both districts were included in the lawsuit, though the court didn’t find sufficient evidence that Hood’s district had been cracked. Michigan’s 110 House districts are drawn to include roughly 90,000 voters.

However, LaGrand says the city of Grand Rapids is a “Democratic stronghold,” so new boundary lines are unlikely to significantly change the city’s representation in Lansing. 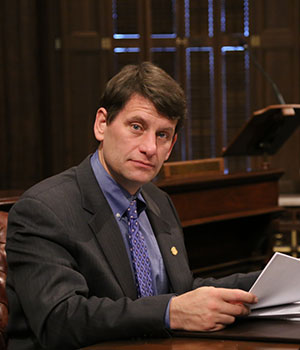 “It’s hard to imagine two districts in Grand Rapids that aren’t both strongly Democratic,” said LaGrand, a former Grand Rapids City Commissioner and Kent County assistant prosecutor. “I don’t think there’s a big immediate impact for voters in Grand Rapids, but I could be wrong. At the end of the day we have to make lines that are fair, proportionate and give voters the best opportunity to have their voices heard."

Kent County GOP Chairman Joel Freeman could not immediately be reached for comment.

Additionally, the court ruling identified the 91st House District — which covers the outlying areas of Muskegon County and wraps around the cities of Muskegon and North Muskegon — as a “cracked district that is more Republican” than almost all alternative maps drawn by political science researchers.

While the 2nd Congressional District along Lake Michigan from Ludington to Holland held by U.S. Rep. Bill Huizenga, R-Zeeland, is not among the districts identified in the lawsuit, its boundaries could shift if the 1st and 4th Congressional districts are redrawn. This goes for other areas of the state that — while not part of the lawsuit — could see new boundaries as other districts are redrawn, particularly impacting term-limited state senators.

The federal court ruling comes ahead of the 2020 Census, which will be another crucial year for Michigan Democrats’ attempt to pick up more state legislative and congressional seats. Whether new political boundaries are drawn for 2020, the new Census data requires a new set of boundaries for the 2022 election.

Area Democrats are optimistic the new data — along with a new citizen redistricting commission overwhelmingly approved by voters in 2018 — will benefit them in the historically Republican stronghold of West Michigan.

“I think West Michigan is becoming more Democratic,” LaGrand said. “But I’m always a little less focused on what Census data comes in than I am making sure we’re doing our jobs representing the community.”

Anyway it lands, we will win.