Documents released over the past week by civil liberties advocates show a close relationship between the Grand Rapids Police Department and federal immigration agents, including sharing information about undocumented immigrants who report serious crimes to help gain legal status.

Under the federal U visa program, undocumented immigrants can seek a certification from local law enforcement that may help them gain legal status from the U.S. government. The program, passed by Congress in 2000, is meant to help police solve serious crimes while also building trust with the immigrant community.

Documents recently obtained by the American Civil Liberties Union (ACLU) of Michigan and Michigan Immigrant Rights Center, however, show GRPD sharing information with U.S. Immigration and Customs Enforcement (ICE) officials about U visa applicants. GRPD’s former U visa certifier, Capt. Curt VanderKooi, was reinstated to his post on Friday after a second month-long investigation into his role in a case involving U.S. citizen and Marine veteran Jilmar Ramos-Gomez, who was detained by ICE for three days. VanderKooi is no longer GRPD’s U visa certifier as a result of the case.

Immigration attorneys have expressed concerns after learning about VanderKooi’s role as GRPD’s U visa certifier and his ability to give ICE personal information about undocumented immigrants.

Those concerns remain after advocacy groups released more than 200 pages of emails between GRPD and ICE spanning January 2017 to February 2019. VanderKooi’s contact with ICE involving U visa applicants also is included in a secondary GRPD Internal Affairs Unit report completed on April 19. The report exonerated VanderKooi. 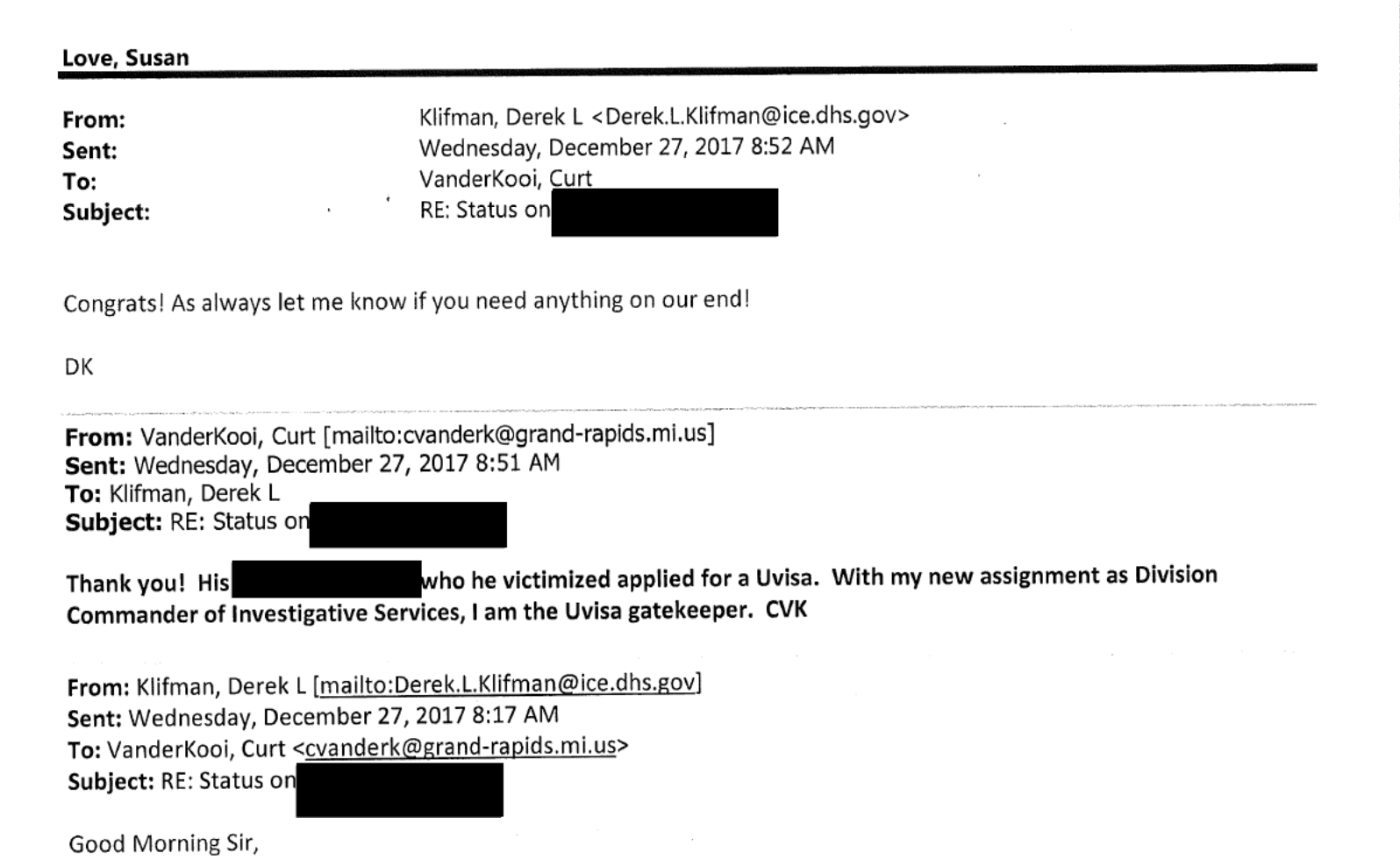 In a Dec. 27, 2017 email, VanderKooi tells ICE agent Derek Klifman that he was newly assigned as “Division Commander of Investigative Services, I am the Uvisa [sic] gatekeeper.” Klifman responds by email one minute later: “Congrats! As always let me know if you need anything on our end.”

In another email, from Feb. 12, 2018, VanderKooi refers to an applicant seeking a U visa certification as “one of those comical situations” in which someone pleads guilty to domestic violence while the victim applies for a U visa certification, and eventually the couple gets back together.

Earlier this month, GRPD Sgt. Dan Adams told Revue that he didn’t know whether VanderKooi had shared U visa applicants’ information with ICE, but that it was “highly unlikely as it defeats the purpose of the U visa.”

Adams clarified on Tuesday that he “may have misunderstood” the original question.

“The U-Visa coordinator does have to contact ICE from time to time to ask clarifying questions, etc. when U-Visas are requested,” Adams said in an email. “But that DOES NOT include tipping off ICE about undocumented subjects seeking U-Visa application.”

Advocates and other law enforcement officials told Revue this month that the U visa program is valuable in solving serious crimes and bringing justice to victims, regardless of their immigration status.

“When survivors of crime are too scared to go to the police, that makes all of us less safe,” Miriam Aukerman, senior staff attorney at ACLU of Michigan, told reporters Tuesday. “(The U visa program) was put in place precisely because they recognized public safety is incredibly important. All victims and survivors regardless of their status should feel safe coming to the police.”

Aukerman added that the emails released this week are likely just the “tip of the iceberg” in understanding GRPD’s relationship with ICE. Many of the documents were redacted, while text message exchanges also would likely add to the story.

Details about the U visa process are part of the advocates’ broader investigation into GRPD’s alleged discriminatory policing practices. On Tuesday, the ACLU of Michigan and Michigan Immigrant Rights Center filed formal complaints with the Michigan Department of Civil Rights alleging discrimination based on race. One involves the Ramos-Gomez incident. The second complaint involves a March 2019 incident in which a GRPD officer pulled a gun on two teenagers, including a 15-year-old of Mexican descent.