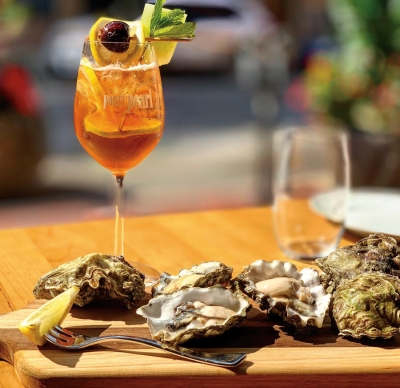 There’s a new place to hang in downtown Grand Rapids thanks to Social House. The bar and restaurant took over IRON’s old spot at 25 Ottawa Ave. SW, offering classic American eats like burgers, entrees and salads, alongside a full bar with craft beer, specialty cocktails and the rest. The menu also features a few “social platters” meant to share, like the Mixed Grill, with rotating sausage, coriander-crusted tuna, sliced sirloin, smoked bleu cheese, and brown ale mustard, all on a bed of fries.

Muskegon has a new craft cocktail bar and distillery in the form of Burl & Sprig, specializing in rum and small places. Head to the art-filled tasting room at 500 W. Western Ave. for a premium cocktail like the Curve Ball, made with spiced rum, house-made falernum, pineapple gum syrup, lime juice, and bitters. It’s all right next to Pigeon Hill Brewing, so you can make a day of it.

Forty Pearl in downtown Grand Rapids has relaunched with a kitchen and full cocktail bar. Before, the space at 40 Pearl St. was only serving up wine from the Brengman Brothers, so we’re glad to see even more reasons to stop in. The new menu has oysters from all over North America, alongside high-end entrees, rice bowls, sandwiches, cured meats, artisan cheeses, and more. A partnership with Grand River Distillery means there are excellent spirits going into a huge cocktail menu. Bar Manager Welsey Whitman recommends the Little Red Hen, a sangria with hand-squeezed orange juice, rye whiskey and an Earl Grey-infused gin.

I Don’t Care GR is the newest balcony bar for those “in the know.” To be quite honest, there’s barely any information out there, but what we do know is that the bar requires a secret access code to get in. You can get it by heading to idontcaregr.com, or maybe just ask someone who looks hip. The bar overlooks the second floor of the Amway Grand Plaza off Monroe Avenue. Slightly classy attire is requested.

Jonny B’z is no more. The hot dog, burger and barbecue restaurant at 701 Wealthy St. SE in Grand Rapids ended its nine-year run on Sept. 30. Years ago, Jonny B’z moved to its current location to become more of a sit-down restaurant, despite years of success as a late-night counter joint across the street. The owners admit in a recent Facebook post that the move was akin to New Coke, Windows Vista, or “Vanilla Ice going to dreadlocks.” That is to say, it didn’t quite work. However, the same owners are opening a new concept called Royals in December of this year, so keep an eye out!

If you have any closings, openings or other business news for REVUE, e-mail josh@revuewm.com.

Tweet
Published in News
More in this category: « What's Going On: October 2019 Potshots: October 2019 »
Login to post comments
back to top