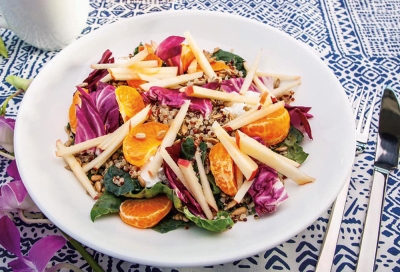 Studio Park is now open in downtown Grand Rapids, bringing a full-on multiplex to the city. With it come new locations for Malamiah Juice Bar and Eatery, Funky Buddha Yoga, Pump House Frozen Yogurt Bar, and Leo’s Coney Island. There’s also a brand-new restaurant, One Twenty Three, named after the whole complex’s address at 123 Ionia Ave. SW. The eatery has an upscale meatloaf alongside other New American dishes and comfort food. Also, just so you know, parking is totally free with the purchase of a movie ticket!

Grand Rapids has a new yoga studio in the form of Heights Yoga Project. Located on the West Side at 744 Leonard St. NW, the studio describes itself as “a community for unfinished projects,” putting an emphasis on the idea that we are all works in progress and continually growing. The standard drop-in rate is $12.

Morning Belle has arrived, replacing what was once Twisted Rooster with a new concept entirely focused on breakfast, brunch and lunch. The new restaurant is full of pastel colors, flowers and colorful meals. The menu ranges from comfort food to healthy options, such as the Harvest Salad with kale, quinoa, sunflower seeds, red endive, mandarin oranges, apples, goat cheese and grain mustard dressing. If you’re looking for a drink, you can also get a light, refreshing cocktail or a spiked cold brew.

Third Nature Brewing finally arrived in Rockford with plenty of beer in hand. The brewery at 7733 Childsdale Ave. NE has a deep love for nature, even growing itsown hops to use. The taproom features a big wooden bar with a live edge, and a huge patio that’s home to multiple fire pits. The building itself is situated right in the woods, surrounded by nature.

Ed Dunneback & Girls Farm Market now has its own drinks, with Pink Barrel Cellars offering beer, wine and hard cider, such as the Dunneback Blonde and Pumpkin Spice Coffee Brown. Head to the farm at 3025 6 Mile Rd., Grand Rapids for some apple picking and a corn maze, then go to the cellars for a nice autumn drink.

PIND Indian Cuisine opened in downtown Grand Rapids, yet again giving life to the building that once held G.B. Russo’s and Bagger Dave’s before that. The  restaurant at 241 W. Fulton St. offers a huge variety of Indian food, fully on display at the lunch buffet that’s served seven days a week. You’ll find more than 18 items to choose from for $10.95. Or head in for dinner and have a fine-dining experience.

If you have any closings, openings or other business news for REVUE, e-mail josh@revuewm.com.