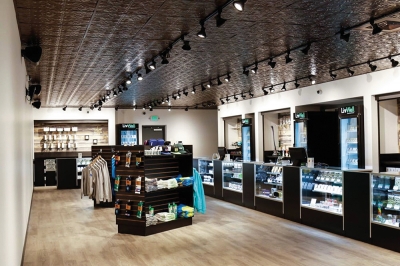 One of LivWell's locations in Denver. Courtesy Photo

This past month, two steps forward in West Michigan were a giant leap for safe cannabis access. In early October, the region’s two largest cities — Grand Rapids and Muskegon — formally opted to allow recreational marijuana businesses. Muskegon is a bit further ahead, approving ordinances to regulate the approval process, while Grand Rapids will spend roughly the next six months sorting out how exactly that will happen.

Muskegon Township also opted in, allowing up to seven retail stores in commercial districts. (WZZM-TV reports applicants lined up outside township hall after the vote to have first crack at applications.) On Oct. 15, Battle Creek was the latest to opt-in as of press time. Additionally, the state has expanded the number of municipalities in its social equity program that have been disproportionately affected by prohibition.

These are positive developments, since more than half of Michigan municipalities have chosen to ban recreational businesses. Come Nov. 1, though, the floodgates will start to open as the state accepts recreational applications. Some businesses hope to open their doors within the month. In early October, the state released specific guidelines for applying, including for consumption facilities and temporary events.

As Kelli Hykes, government affairs director at Weedmaps, wrote in a recent op-ed for Bridge Magazine, local governments opting out of recreational marijuana jeopardizes revenue, talent and opportunity: “Local bans drive consumers back to the illicit market. As a result, taxable revenue is lost, and profits that should be going to legal, regulated businesses end up going back into the pockets of illicit players.”

In other news, Michigan hemp farmers are starting to see the fruits of their labor. This fall, the first industrial hemp crops are being harvested across thousands of acres in Michigan. With low commodity prices and unpredictable trade whims of the unhinged Commander in Chief, the switch to hemp is promising for some farmers. The outlook is even more optimistic for 2020, when the agriculture community and the state can better predict the crop’s potential. Given the recent craze of CBD products that are made with hemp, why wouldn’t farmers be excited?

At the Capitol, state lawmakers continue to focus on expungement, or providing residents an opportunity to erase their criminal convictions related to marijuana. While lawmakers proposed an expungement bill package in September, two Detroit-area representatives introduced a bill in October that would be “one of the most comprehensive in the nation,” Detroit Metro Times reports. It would allow expungements for misdemeanors and some low-level felonies but also streamline the “logistical nightmare” of the expungement process, as one advocate says. The bill has 33 co-sponsors and the support of Attorney General Dana Nessel and civil liberties groups. As advocates correctly note, expungement is a crucial step in righting the decades of wrongs in the failed War on Drugs.

On a personal note, I visited a couple of Colorado dispensaries last month while traveling back home on our honeymoon, including one of six LivWell locations in Denver. The company, LivWell Holdings, plans to operate retail, growing and processing facilities in Michigan. The dispensary I visited — rated highly on Weedmaps — in the city’s Park Hill area was tucked into a somewhat industrial setting. After a few minutes in the waiting room, I was directed inside and received one-on-on help from an employee, who guided me through various edibles (I was told the mints are outstanding), wax and a little something for our 11-year-old dog, Charlie, back home.

The products were affordable and reliable, of course, but what struck me was the employee’s excitement about Michigan becoming a legal state. Hopefully, we see enough openness among communities to allow many of these businesses to operate here.

Let’s not screw it up.

Tweet
Published in News
More in this category: « West Michigan Biz Beat: A Roundup of Openings, Closings and Other Local Business News, November 2019 'Hamilton' tickets going on sale in November »
Login to post comments
back to top