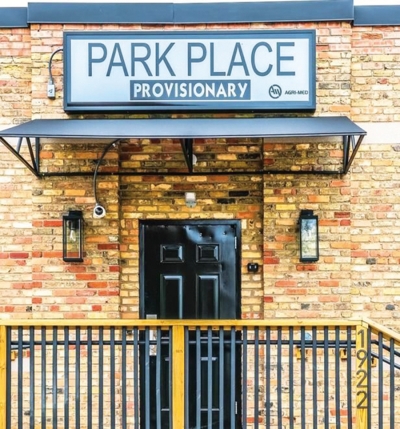 State officials have granted some leeway by allowing medical marijuana dispensaries that plan to also sell recreational product to do so after Dec. 1. The state started taking applications Nov. 1 and two weeks later announced it would allow growers, processors, and provisioning centers to transfer up to half of their inventory for recreational sales. (The state estimated roughly a dozen stores would open first but hasn’t named them as of press time.) Similar to the initial opening of medical marijuana retail stores, shops technically couldn’t sell product for months until it received crops from licensed growers. Instead of a rush of recreational stores opening next month, a “slow build out” is more likely, state officials say. Park Place Provisionary in Muskegon appears to be one of the first allowed to sell recreational marijuana.

“This will create an environment where businesses can supply the market as quickly as possible,” Marijuana Regulatory Agency spokesperson David Harns told MLive.

Not so fast, though, claims the Michigan Cannabis Industry Association. Leaders at the state’s main cannabis business advocacy group say they were “blindsided” by the move allowing medical licensees to transfer product for recreational sales, MLive reports. They fear medical marijuana shortages will be exacerbated by the decision and are urging members not to do it.

While not all advocates are satisfied, the state Department of Licensing and Regulatory Affairs has met the law’s requirement to issue licenses within a year. It’s a good time to reflect on cannabis reform in Michigan over the past decade. In 2010, just over a year after voters approved the state’s medical marijuana law, few could predict how it would unfold. Indeed, it got messy. Dozens of unregulated stores surfaced in cities like Lansing and Detroit. Law-abiding growers were sent to prison for violating federal law. Law enforcement, prosecutors and local officials held a collective shrug about how it would play out in the judicial system. Those days are behind us — for the most part — and Michigan is poised to land itself in the national spotlight as a cannabis-friendly state.

Still, some cities aren’t ready to embrace the change. In the November election, voters in municipalities across the state raised their Not In My Back Yard flags when asked whether to opt in to allowing recreational cannabis businesses. Seven of 10 communities, including South Haven, said no to recreational marijuana at the ballot box.

Bridge Magazine notes a more disturbing trend unfolding over the past year. Roughly a dozen cities selected to participate in the state’s social equity program have banned recreational businesses, despite a majority of residents approving the statewide ballot initiative in 2018. An earlier analysis by MLive this year found about 4 in 10 communities that backed recreational marijuana have opted out of allowing it. The findings highlight the disconnect between local officials hellbent on maintaining the status quo rather than adapting to changing voter attitudes. Perhaps their time in office has expired.

On the public health front, state officials are still struggling to link the recent spike in vaping-related illnesses and devices containing marijuana. State officials said in late October that 81 percent of Michigan residents sickened by vaporizers used products containing THC, but no specific brands have been linked to the outbreak. Vapes manufactured illegally are of particular concern. We hope the state continues to take a serious look at this issue after initially stalling on the THC connection. Until then, it’s joints and edibles for us.

Tweet
Published in News
More in this category: « What’s Going On: December 2019 Year-End Biz Beat 2019: A round-up of openings and closings in West Michigan »
Login to post comments
back to top