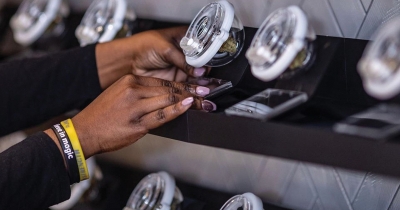 Month by month, the number of retail recreational cannabis stores continues to grow — including in West Michigan — where several shops have opened since the new year.

A handy map produced by MLive shows seven recreational provisioning centers in West and Southwest Michigan: two each in Muskegon, Calhoun and Van Buren counties and one in Newaygo County. As of Feb. 2, the state had approved licenses for 43 recreational dispensaries and 18 growers, according to state data.

The region’s population center, Grand Rapids, continues its slow entry into the market. The city’s first medical marijuana dispensary — Fluresh, in Southwest Grand Rapids — opened in early February to celebratory crowds. (A less enthusiastic friend of mine groaned at the $60 price tag for an eighth of an ounce of flower.)

Nonetheless, Grand Rapids’ willingness to embrace the recreational market is a victory for cannabis reform activists who basically pleaded with the city to get moving in recent years. MiBiz reports that the city’s Planning Commission approved recreational regulations at a Feb. 13 meeting, with public hearings slated at the City Commission in March. As of now, the city may start accepting recreational applications in April.

Now, about those prices. Over the past six months, state officials have taken a deliberately slow approach to unrolling the recreational market, approving licenses in a few places at a time. As has been well-documented, though, the supply hasn’t been able to keep up with demand. (How could it, if recreational grow operations, which take months to produce product, are approved at the same time as stores?) A portion of stores’ medical supplies have been allowed for recreational sales, but across the state, customers have lamented sky-high weed prices. The impacts — which advocates and some lawmakers warned about months ago — are especially hard on medical marijuana patients who rely on cannabis for treatment.

Despite the hiccups, the state reported nearly $18 million in sales through
December and January, capturing just under $3 million in tax revenue. (For what it’s worth, Illinois’ sales reached nearly $40 million during its first month of recreational cannabis.)

The state’s handling of the medical and recreational markets have had a mixed impact on the jobs market, according to a recent report by Leafly. Prior to the new regulatory system, the group estimated Michigan had roughly 15,000 jobs across the state. In 2019, the report estimates Michigan lost about 7,000 of those jobs. It’s a “huge loss,” researchers have said, but
expect a rebound within the next few years as more communities allow businesses.

That’s not the only noteworthy employment aspect of Michigan’s cannabis market: Earlier this year, the state’s Marijuana
Regulatory Agency proposed rules that would require “labor peace agreements” with companies and employees. These don’t force unionization among workers, but typically mean employers won’t impede workers’ efforts to unionize if they choose.

The proposed rules have made strange bedfellows between Republicans and cannabis activists who were once at odds over legalization in the first place, as Bridge Magazine notes. The MRA held a public hearing in Lansing this past month, with critics calling it a “cockamamie scheme” and an “extraordinary precedent” that could apply to other industries.

Cannabis workers, though, feel they need more representation in the rapidly growing industry. As one budtender from Kalamazoo reportedly put it: “Currently, we as workers have no representation or power as the industry booms and some people make millions of dollars. I worked hard and played by the rules. Companies should do the same thing.”

Tweet
Published in News
More in this category: « West Michigan Biz Beat: March 2020 The Revue Guide to Dining and Drinking at a Distance »
Login to post comments
back to top