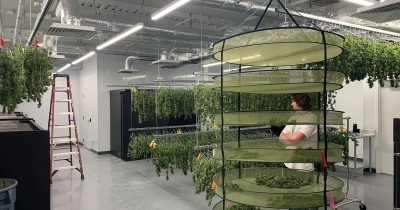 Coronavirus be damned, Michigan’s recreational cannabis industry is starting to hit its stride. A little over six months since the first recreational dispensary opened in Ann Arbor, MLive reported in mid-June that weekly recreational sales eclipsed medical sales for the first time.

Communities around the state are seeing the steady opening of large-scale grows and retail stores, leaving the impression that the training wheels are slowly coming off.

Those sales mean much-needed new revenue for the state and local governments, and communities across the region are getting in on the action. In recent weeks, sales have started or recreational ordinances have been adopted in Kalamazoo, Portage, and Cedar Springs. Muskegon and Battle Creek each now have three dispensaries.

Even the city of Grand Rapids, whose dawdling approach to recreational marijuana has been discussed plenty of times in these pages, is considering a plan that would fast-track existing medical dispensaries to apply for a recreational license. On July 7, the City Commission will consider a plan that would allow medical businesses — including dispensaries, which were later added — to immediately apply for a recreational license. The city is scheduled to open recreational applications in October, six months after the original date.

Though adding provisioning centers faces some opposition on the commission, First Ward representative Jon O’Connor — the commission’s only stalwart cannabis supporter — says he’s hopeful the plan will get the majority’s support. As he has noted, Grand Rapids can get recreational cannabis delivered to them or can travel within an hour in all four points to shop at a dispensary. It only makes sense to move Grand Rapids forward and, as O’Connor noted, bring in sorely needed revenue that’s been lost due to the pandemic.

In other Furniture City news, Terrapin — a Boulder, Colorado-based vertically integrated company with operations in multiple states — cut the ribbon in mid-June on a 35,000-square-foot grow facility near the I-96/I-196 interchange. It appears to be the city’s first stand-alone grow operation. The company scheduled a job fair the week after, with a hiring emphasis on social equity.

Terrapin CEO Chris Woods put it this way, in light of the flourishing Black Lives Matter movement: “We can no longer ignore the mistakes of the past without a forward-looking approach for a progressive future. Corporations have a duty and a responsibility to turn thoughts into action. As we launch in Michigan, Terrapin wants this new cannabis industry to be a leader as we move from a tipping point in America to meaningful reform.”

Meanwhile, three Michigan dispensaries — including Pharmhouse Wellness in Grand Rapids — announced in early June a store discount (10% for prior felonies, 5% for prior misdemeanors) to customers with a cannabis-related conviction on their record. The “redemption discount” was inspired by Ryan Basore, whose own story of redemption we detailed last month. Pharmhouse manager Chris Silva said the promotion is a nod to people like Basore, to “ensure they’re recognized for the sacrifice they made for cannabis.”the war on drugs.

Tweet
Published in News
More in this category: « Best of the West 2020 Finalists Biz Beat: July 2020 »
Login to post comments
back to top