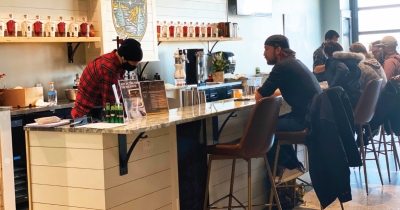 Above all else, 2020 has been a time of change. Businesses are closing and opening left and right.

Some restaurant owners have been hit so hard by the pandemic, they viewed this as a good time to get out. Others see the shifting landscape as an opportunity to try something new.

As always, we’re here at the end of the year to tell you who arrived on the scene, who left, and what to expect next.

Editor’s Note: Due to COVID, these businesses may or may not actually be open to customers when you’re reading this.

In Muskegon, Wonderland Distilling joined the lakeshore with a new cocktail bar. Head to 1989 Lakeshore Dr., Suite B for snacks and craft cocktails made with Wonderland’s own spirits, such as the Sweater Weather, with vodka, apple liqueur, lemon, brown sugar simple syrup, bitters and soda water. They’re also providing to-go cocktails in cans to enjoy at home or out in the wild. Wonderland’s spirits currently include vodka, gin, and a blend of straight whiskeys.

If you’re looking for refined Dutch cuisine, head to Knoop Rooftop Beer Garden, which opened recently in downtown Grand Rapids atop Canopy by Hilton. Perched up above at 131 Ionia Ave. SW, this beer garden and restaurant has signature cocktails, an entire pretzel menu, and a varied, Dutch-inspired dinner menu. A sample visit might include the Wood Works, made with blended scotch, Islay scotch, cynar, maple and orange bitters; a Sizzling Sriracha pretzel with spinach & artichoke dip; and a lobster quesadilla, with lobster, heirloom tomatoes, charred veggies, scallions, avocado crème and chipotle aioli.

Basalt is a new culinary experience from chef Steven Martinez-Thiel, primarily focused on catering. If you want a modern, elevated Tex-Mex meal, hire Basalt for your small, safe gathering, whether it’s for weddings, work, holidays or any other event. You may also find them collaborating with local businesses like Hyssop Floral, for a dessert and flower combination. The menu features options like achiote wings, enchiladas verdes, and a large taco pack.

For people who love liquids of all kinds, Alt City Beverage Company has arrived in the Downtown Market at 435 Ionia Ave. SW, Grand Rapids. Coffee drinks, smoothies, coldbrew teas, zero-proof cocktails — it’s all here.  Start your day with a café miel, then have a pumpkin pie smoothie for lunch, hibiscus black coldbrewed tea for a pick-me-up, and a nonalcoholic French 75 when you’re done working.

KCM took over Gaia Café’s former space at 209 Diamond Ave. SE, bringing authentic Korean and Japanese cuisine to Grand Rapids. Katsu curry, tamago sandwiches, kimbap, tuna & crab toast — all items you likely won’t find anywhere else around. It’s the kind of food that’s especially popular in California and Hawaii, and also food that owner Jason Kim grew up having at home. Kim has worked in restaurants across the world, including in Korea.

The Medical Mile has a new coffee shop in the form of Kaffeine, at 637 Michigan St. NE, Grand Rapids. The drink menu features all of the coffee drinks you’d expect, along with special lattes like Masala Chai, Turmeric Ginger Latte and Military Latte, made with matcha green tea, vanilla syrup, espresso and cocoa powder. They’re working on food as well, so stop in and see what they have!

The cheekily named Quarantino’s opened at 1444 Lake Drive SE. They’re bringing Detroit-style pizza to Grand Rapids with a variety of pies, like the Buffalo Chicken and Yes, We Have A Chicken Pesto Pizza.

Hailing from the east side, Two James Spirits was finally able to open its Grand Rapids tasting room at 740 Michigan St., sharing an entrance with 7 Monks Taproom. The distillery is known for its Michigan-grown spirits and imaginative craft cocktails.

Taco + Bar joined the Holland community, offering tacos and cocktails as the name suggests. This new restaurant at 220 W. 8th St. is focused on being local, fresh and community-oriented. The menu is unpretentious, yet offers a variety of taco offerings, including two vegetarian options.

Oh, Hello Co. has been an online business since 2014, but owners Kayla and Alex Benda opened a location in 40 Monroe Center in downtown Grand Rapids. Their specialty is unique planners, notebooks and stickers, making it the perfect place to get 2020 off to a creative, organized start. They also offer stationery, greeting cards and just about anything to do with paper.

Adesanya Mead opened in Grandville at 3012 28th St. SW, launching with a nice selection of draft (lightly carbonated) meads, such as the Still Frame, a tangerine, pineapple and mango mead with wildflower honey.

On the Westside, Bestside Bar and Grill opened in August, offering cocktails, shots, and food. Try a crazy shot like Cinnamon Crunch or Peanut Butter & Jelly, then enjoy a burger, sandwich, or pizza — all at 1645 Leonard St. NW, Grand Rapids.

After taking over Zoko 822’s spot at 822 Ottawa Ave. NW, Sandy Point Beach Houseopened in summer. The menu focuses on prime burgers, steaks and fish, along with tacos from sister restaurant MeXo.

In place of Jonny B’z, Royals opened for less than a full day before the stay-at-home order went in effect. Now, it’s back. Head to 701 Wealthy St. SE, Grand Rapids, for a charming neighborhood diner with memorable meals.

Pinktail Poke opened in the Downtown Market at 435 Ionia Ave. SW, Grand Rapids, right alongside High Tide Sodas. It’s all customizable, so you can order a signature bowl and tweak it or build your own from the base up.

Bro’s Doughsarrived in full force with dozens of mini doughnuts in hand. The shop at at 2042 E. Beltline Ave., Grand Rapids is owned and operated by Brodie “Bro” Hock and his wife, Meghan. They offer all kinds of premade creations — or make your own, choosing from more than 50 flavors, including monthly specials. They may be small, but they pack a flavorful punch.

KEEP AN EYE OUT

Tweet
Published in News
More in this category: « How to Keep West Michigan Alive Meet The Marketplace at Studio Park »
Login to post comments
back to top